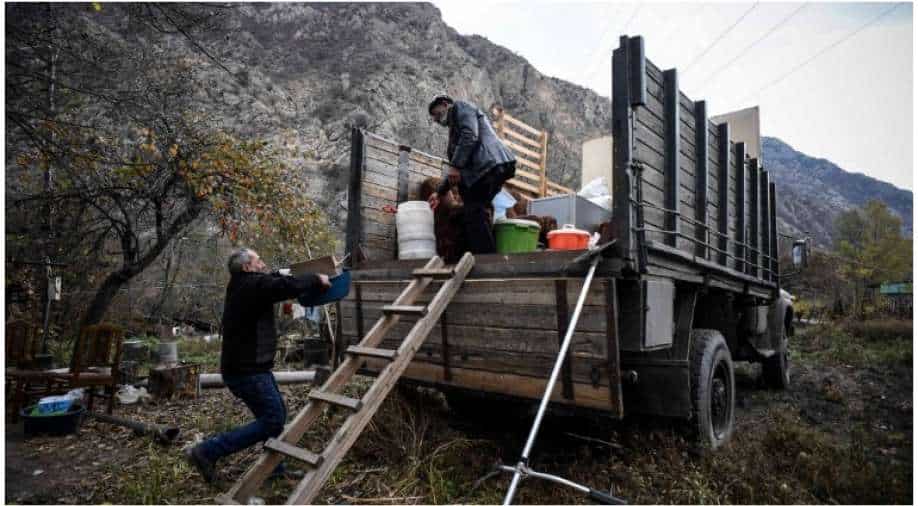 Armenians pack their belongings as they leave their house in the town of Kalbajar on November 12, 2020, during the military conflict between Armenia and Azerbaijan over the breakaway region of Nagorno-Karabakh. Kalbajar is one of the seven districts which will be transferred to Azerbaijan as part of a deal on Nagorno-Karabakh. Photograph:( AFP )

Residents of Kalbajar district, formerly under the control of Armenian separatists are gathering their belongings and vacating their homes as the date of takeover by Azerbaijan comes closer. Kalbajar District will be handed over to Azerbaijan as part of a Russian-brokered peace agreement that put a stop to weeks of fierce fighting between Armenia and Azerbaijan. Both the countries clashed with each other as hostilities broke out at the end of September over disputed Nagorno-Karabakh region. This region broke away from Azerbaijan in 1990s. More than 1400 people have died so far in the war between Armenia and Azerbaijan.

Nobody has ordered residents in the region to leave their homes but they fear retaliatory attacks from Azerbaijan once the takeover takes place on Sunday (November 15).

"I cried all night when I heard the news," says 68-year-old Hayastan Yeghiazaryan told AFP. Her 82 year-old husband Zohrab said that they were not even sure where they will go.

"With the help of the children, we'll try to rent a small apartment in Yerevan," he says, referring to the capital of Armenia, which has been rocked by political unrest since the country's leadership agreed to the peace accord that cedes swathes of territory in Karabakh to Azerbaijan.

"We might be able to come back, don't you think?" he says with a hopeful look.

Kalbajar's residents were encouraged to settle in this region of Azerbaijan by separatist leaders who had grabbed control of the area.