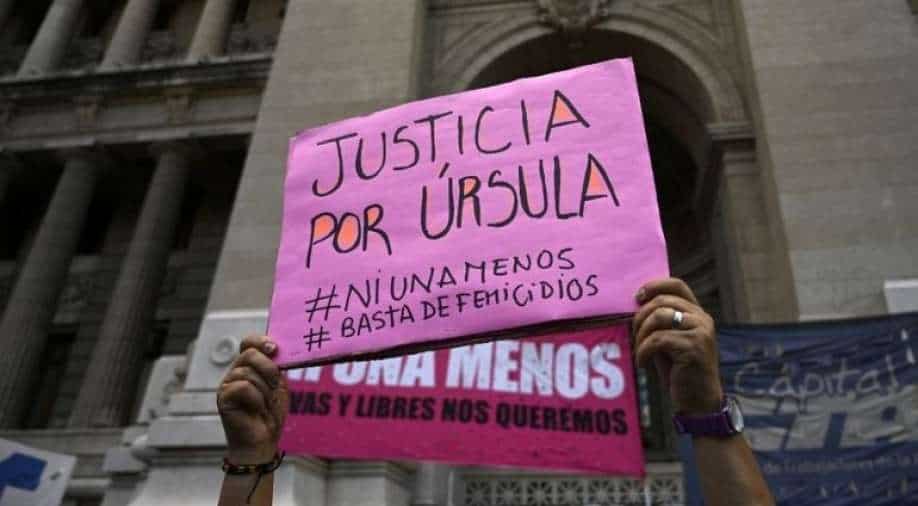 A woman holds a banner demanding justice for Ursula, a woman killed by her former partner, during a protest outside the Palace of Justice in Buenos Aires on Wednesday. Photograph:( AFP )

Protests began following the murder of a 19-year-old Ursula Bahillo near Buenos Aires. Bahillo was stabbed to death. Her body was found with 30 stab wounds. Her neck, back, torso- all scarred with injuries. In the dock is her former boyfriend

Argentina is protesting against femicide, a term, which broadly means the intentional killing of females.

Protests are on across Argentina after a 19-year-old was stabbed to death by her former boyfriend. The man happens to be a police officer. He has now been arrested but the 19-year-old's victim's mother- wants her daughter's murderer to live.

Protesters wrapped in plastic, sign near protesters that reads 'stop’ in Spanish. These visuals tell a disturbing tale.

Protests began following the murder of a 19-year-old Ursula Bahillo near Buenos Aires. Bahillo was stabbed to death. Her body was found with 30 stab wounds. Her neck, back, torso- all scarred with injuries. In the dock is her former boyfriend.

Reports say he is a 25-year-old provincial police officer. Ursula had earlier reported him for violence. The man was issued a restraining order. He has now been arrested. A tougher preventive action, may have kept Ursula alive.

Protesters have gathered holding up placards with a photo of femicide victim.

The 19-year-old's death has also sparked fear. A banner says in Spanish that "We march because we are alive but we do not know until when."

Several protesters have chanted voices against police, holding banner in Spanish "who protects us from the police?"

30 women were murdered in Argentina in January. 12% of these murders were committed by former or current members of the security forces.

Argentina reported 50 femicides during a two-month lockdown. The number was a 10-year-high.

12 women are killed every day in latin America because of their gender. The region is home to 14 of 25 countries with the highest rates of femicide. This is according to the United Nations.

Nassutti said, “What I need is for him to live so that he can pay his sentence with life and not with death because it would be much easier for him to die.”

The grieving mother met Argentina's president Alberto Fernandez, who promised that justice will be delivered to her.