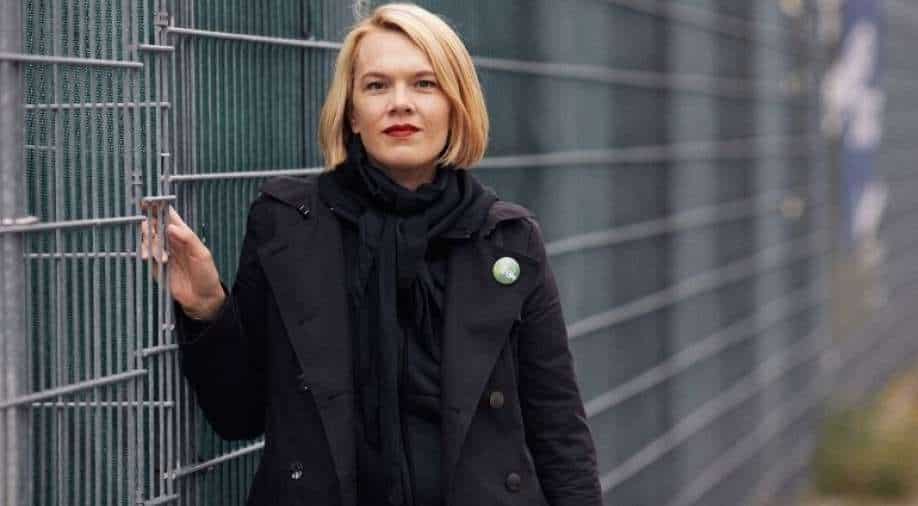 Laura Dornheim, a candidate for the German Parliament who is often attacked for her support of abortion rights and gender equality, in Berlin, Sept. 21, 2021.(Andrew White/The New York Times) Photograph:( The New York Times )

Annalena Baerbock, the 40-year-old leader of the Green Party and the only woman among the top candidates to succeed Merkel, has been the subject of an outsize amount of abuse compared with her male rivals from other parties, including sexist slurs and misinformation campaigns, according to researchers

Scrolling through her social media feed, Laura Dornheim is regularly stopped cold by a new blast of abuse aimed at her, including from people threatening to kill or sexually assault her. One person last year said that he looked forward to meeting her in person so he could punch her teeth out.

Dornheim, a candidate for a Parliament seat in Germany’s election Sunday, is often attacked for her support of abortion rights, gender equality and immigration. She flags some of the posts to Facebook and Twitter, hoping that the platforms will delete the posts or that the perpetrators will be banned. She’s usually disappointed.

“There might have been one instance where something actually got taken down,” Dornheim said.

Harassment and abuse are all too common on the modern internet. Yet it was supposed to be different in Germany. In 2017, the country enacted one of the world’s toughest laws against online hate speech. It requires Facebook, Twitter and YouTube to remove illegal comments, pictures or videos within 24 hours of being notified about them or risk fines of up to 50 million euros ($59 million). Supporters hailed it as a watershed moment for internet regulation and a model for other countries.

But an influx of hate speech and harassment in the runup to the German election, in which the country will choose a new leader to replace Angela Merkel, its longtime chancellor, has exposed some of the law’s weaknesses. Much of the toxic speech, researchers say, has come from far-right groups and is aimed at intimidating female candidates like Dornheim.

Some critics of the law say it is too weak, with limited enforcement and oversight. They also maintain that many forms of abuse are deemed legal by the platforms, such as certain kinds of harassment of women and public officials. And when companies do remove illegal material, critics say, they often do not alert the authorities or share information about the posts, making prosecutions of the people publishing the material far more difficult. Another loophole, they say, is that smaller platforms like the messaging app Telegram, popular among far-right groups, are not subject to the law.

Free-expression groups criticize the law on other grounds. They argue that the law should be abolished not only because it fails to protect victims of online abuse and harassment, but also because it sets a dangerous precedent for government censorship of the internet.

The country’s experience may shape policy across the Continent. German officials are playing a key role in drafting one of the world’s most anticipated new internet regulations, a European Union law called the Digital Services Act, which will require Facebook and other online platforms to do more to address the vitriol, misinformation and illicit content on their sites. Ursula von der Leyen, a German who is president of the European Commission, the 27-nation bloc’s executive arm, has called for an EU law that would list gender-based violence as a special crime category, a proposal that would include online attacks.

“Germany was the first to try to tackle this kind of online accountability,” said Julian Jaursch, a project director at the German think tank Stiftung Neue Verantwortung, which focuses on digital issues. “It is important to ask whether the law is working.”

Marc Liesching, a professor at HTWK Leipzig who published an academic report on the policy, said that of the posts that have been deleted by Facebook, YouTube and Twitter, a vast majority were classified as violating company policies, not the hate speech law. That distinction makes it harder for the government to measure whether companies are complying with the law. In the second half of 2020, Facebook removed 49 million pieces of “hate speech” based on its own community standards, compared with the 154 deletions that they attributed to the German law, he found.

The law, Liesching said, “is not relevant in practice.”

With its history of Nazism, Germany has long tried to balance free-speech rights against a commitment to combat hate speech. Among Western democracies, the country has some of the world’s toughest laws against incitement to violence and hate speech. Targeting religious, ethnic and racial groups is illegal, as is Holocaust denial and displaying Nazi symbols in public.

To address concerns that companies were not alerting the authorities to illegal posts, German policymakers this year passed amendments to the law. They require Facebook, Twitter and YouTube to turn over data to the police about accounts that post material that German law would consider illegal speech. The Justice Ministry was also given more powers to enforce the law.

“The aim of our legislative package is to protect all those who are exposed to threats and insults on the internet,” Christine Lambrecht, the justice minister, who oversees enforcement of the law, said after the amendments were adopted. “Whoever engages in hate speech and issues threats will have to expect to be charged and convicted.”

Facebook and Google have filed a legal challenge to block the new rules, arguing that providing the police with personal information about users violates their privacy.

Facebook said that as part of an agreement with the government it now provides more data about the complaints it receives. From January through July, the company received more than 77,000 complaints, which led it to delete or block about 11,500 pieces of content under the German law, known as NetzDG.

“We have zero tolerance for hate speech and support the aims of NetzDG,” Facebook said in a statement.

Twitter, which received around 833,000 complaints and removed roughly 81,000 posts during the same period, said a majority of those posts did not fit the definition of illegal speech, but still violated the company’s terms of service.

“Threats, abusive content and harassment all have the potential to silence individuals,” Twitter said in a statement. “However, regulation and legislation such as this also has the potential to chill free speech by emboldening regimes around the world to legislate as a way to stifle dissent and legitimate speech.”

YouTube, which received around 312,000 complaints and removed around 48,000 pieces of content in the first six months of the year, declined to comment other than saying that it complies with the law.

The amount of hate speech has become increasingly pronounced during election season, according to researchers at Reset and HateAid, organizations that track online hate speech and are pushing for tougher laws.

The groups reviewed nearly 1 million comments on far-right and conspiratorial groups across about 75,000 Facebook posts in June, finding that roughly 5% were “highly toxic” or violated the online hate speech law. Some of the worst material, including messages with Nazi symbolism, had been online for more than a year, the groups found. Of 100 posts reported by the groups to Facebook, roughly half were removed within a few days, while the others remain online.

The election has also seen a wave of misinformation, including false claims about voter fraud.

Annalena Baerbock, the 40-year-old leader of the Green Party and the only woman among the top candidates to succeed Merkel, has been the subject of an outsize amount of abuse compared with her male rivals from other parties, including sexist slurs and misinformation campaigns, according to researchers.

Others have stopped running altogether. In March, a former Syrian refugee running for the German Parliament, Tareq Alaows, dropped out of the race after experiencing racist attacks and violent threats online.

While many policymakers want Facebook and other platforms to be aggressive in screening user-generated content, others have concerns about allowing private companies to make decisions about what people can and can’t say. The far-right party Alternative for Germany, which has criticised the law for unfairly targeting its supporters, has vowed to repeal the policy “to respect freedom of expression.”

“Facebook doesn’t err on the side of caution, they just take it down,” York said. Another concern, she said, is that less democratic countries such as Turkey and Belarus have adopted laws similar to Germany’s so they could classify certain material critical of the government as illegal.

Renate Künast, a former government minister who once invited a journalist to accompany her as she confronted individuals in person who had targeted her with online abuse, wants to see the law go further. Victims of online abuse should be able to go after perpetrators directly for libel and financial settlements, she said. Without that ability, she added, online abuse will erode political participation, particularly among women and minority groups.

In a survey of more than 7,000 German women released in 2019, 58% said they did not share political opinions online for fear of abuse.

“They use the verbal power of hate speech to force people to step back, leave their office or not to be candidates,” Künast said.

Dornheim, the candidate for Parliament, who has a master’s in computer science and used to work in the tech industry, said more restrictions were needed. She described getting her home address removed from public records after somebody mailed a package to her house during a particularly bad bout of online abuse.

Yet, she said, the harassment has only steeled her resolve.

“I would never give them the satisfaction of shutting up,” she said.