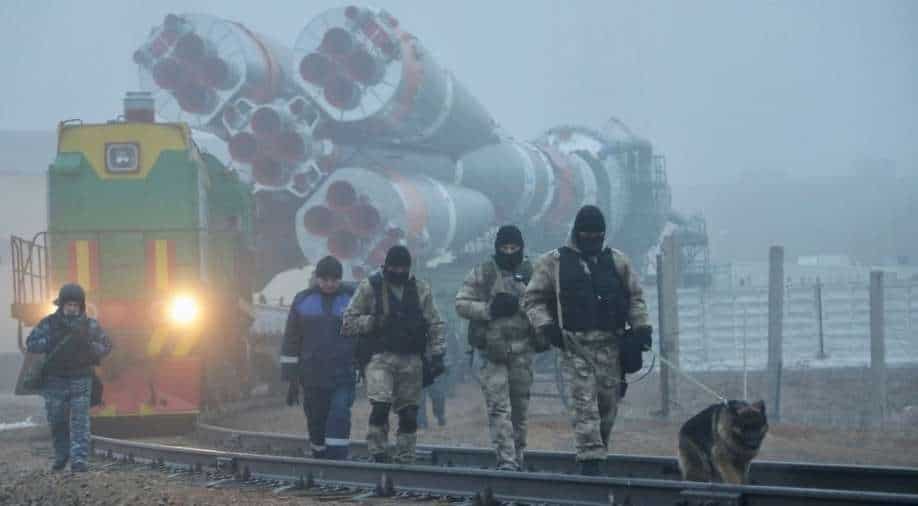 Security personnel walk in front of a Soyuz-2.1b rocket booster with a Fregat upper stage and satellites of British firm OneWeb is transported to a launchpad at the Baikonur Cosmodrome, Kazakhstan March 2, 2022. Photograph:( Reuters )

Dmitry Rogozin, the head of the Russian space agency, was quoted as saying on Wednesday (March 2) that Russia will treat any hacking of its satellites as a justification for war.

Amid a war-like situation after Russia's invasion of Ukraine, a hacking group Anonymous claimed that they have shut down Russia's space agency.

Affiliated with Anonymous, the Network Battalion 65 or 'NB65' is believed to have hacked the space agency of Russia as they claimed to show the server information for Roscosmos on Twitter.

Such hacking would mean that Russian President Vladimir Putin will not be able to control spy satellites amid the ongoing invasion in Ukraine, which has killed more than 100 people, including children.

In a tweet, Anonymous TV wrote: "Hacking group 'NB65', affiliated with #Anonymous has shut down the Control Center of the Russian Space Agency 'Roscosmos'. #Russia has no more control over their own Spy-Satelites."

Meanwhile, denying the reports and warning against such actions, the head of the Russian space agency called Anonymous 'scammers and petty swindlers'.

IN PICS | Which assets of Russian President Vladimir Putin can be seized due to Ukraine invasion?

The information of these scammers and petty swindlers is not true. All our space activity control centers are operating normally. https://t.co/MY0qzlLqCI

"Offlining the satellites of any country is actually a casus belli, a cause for war," Interfax quoted him as saying.

Rogozin also said his agency wanted British-based tech firm OneWeb to provide guarantees that its satellites are not going to be used against Russia, Interfax added.

Without these, Rogozin said Russia will cancel the planned March 4 launch of 36 OneWeb satellites from the Baikonur cosmodrome, which Russia rents from Kazakhstan, without compensating OneWeb, the Russian news agency reported.