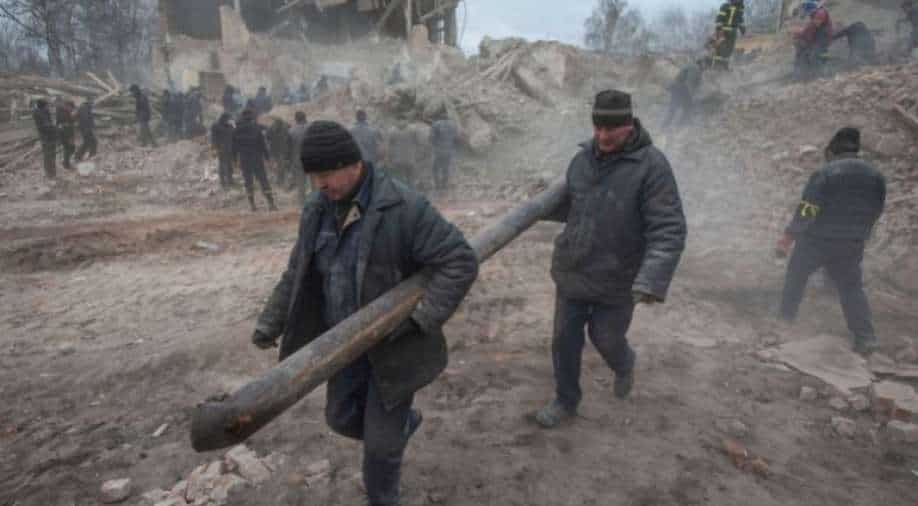 People remove debris at the site of a military base building that, according to the Ukrainian ground forces, was destroyed by an air strike, in the town of Okhtyrka in the Sumy region, Ukraine Photograph:( Reuters )

Residents began leaving the northeastern city of Sumy and the town of Irpin near the capital Kyiv, but it was unclear if Ukraine would agree to use other humanitarian corridors if they took Ukrainians to Russia or Belarus

Twenty-one people, including two children, were killed in airstrikes on the besieged northeast Ukrainian city of Sumy, the authorities said.

"The bodies of 21 people, including two children" were found at the site of strikes, the regional public prosecutor said on Facebook.

The Russian onslaught has trapped people inside cities that are running low on food, water and medicine amid the biggest ground war in Europe since World War II.

Previous attempts to lead civilians to safety have crumbled with renewed attacks. But on Tuesday, video posted by Ukrainian officials showed buses with people moving along a snowy road from the eastern city of Sumy and yellow buses with a red cross on them in southern port of Mariupol.

"We have already started the evacuation of civilians from Sumy to Poltava (in central Ukraine), including foreign students," the foreign ministry said in a tweet. "We call on Russia to agree on other humanitarian corridors in Ukraine."

Those buses are headed to other cities in Ukraine, but many people have chosen to flee the country instead. Safa Msehli, a spokesperson for the UN’s International Organisation for Migration, tweeted that 2 million have now left, including at least 100,000 people who are not Ukrainian.

Also see | Why Ukraine has been able to stall Russian advance?

Russia’s coordination center for humanitarian efforts in Ukraine and Ukrainian Deputy Prime Minister Iryna Vereshchuk both said a cease-fire was agreed to start Tuesday morning to allow some civilians to evacuate, but it was not clear where all the corridors would lead to, amid disagreement between the two sides.

Russia’s coordination center suggested there would be more than one corridor, but that most would lead to Russia, either directly or through Belarus. At the UN, however, the Russian ambassador suggested corridors from several cities could be opened and people could choose for themselves which direction they would take.

Vereshchuk, meanwhile, only said that the two sides had agreed to an evacuation of civilians from the eastern city of Sumy, toward the Ukrainian city of Poltava. Those to be evacuated include foreign students from India and China, she said.

She reiterated that proposals to evacuate civilians to Russia and its ally Belarus, which was a launch pad for the invasion, were unacceptable.

Later, Ukrainian presidential aide Kyrylo Tymoshenko posted a video of yellow buses with a red cross plastered on the side that he said were being used for evacuations from Mariupol toward the city of Zaporizhzhia. He said that humanitarian aid was also being sent in to Mariupol.

Demands for effective passageways have surged amid intensifying shelling by Russian forces. The steady bombardments, including in some of Ukraine’s most populated regions, have yielded a humanitarian crisis of diminishing food, water and medical supplies.