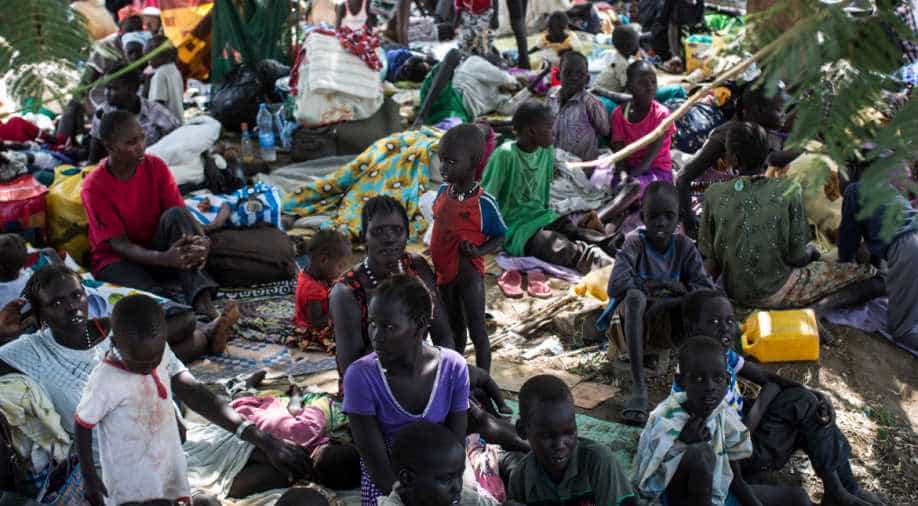 Friday's violence in the world's youngest country represents yet another blow to a shaky peace deal that has so far failed to end the civil war. (Representative image) Photograph:( Getty )

Follow Us
The streets of South Sudan's capital were charged with tension today, the nation's fifth independence anniversary, after an outbreak of heavy fighting on the eve left at least 150 soldiers dead.

Friday's violence in the world's youngest country represents yet another blow to a shaky peace deal that has so far failed to end the civil war that broke out in December 2013.

"The number of casualties is over 150 killed," said Roman Nyarji, a spokesman for rebel leader-turned Vice-President Riek Machar, adding the death toll of soldiers on both sides may rise further.

"We are expecting a bigger number of casualties because the two units of the presidential guard were all engaged yesterday," he said referring to bodyguard units of Machar and his rival, President Salva Kiir.

The shooting began when Kiir and Machar met at the presidential palace and initially involved each man's bodyguards.

The shootout, lasting about half an hour, quickly escalated from small-arms fire to heavier weapons and spread with machine-gun and artillery heard in several parts of Juba before subsiding after nightfall.

The capital was tense today with a heavy security presence and few civilians on the streets.

Foreign governments warned their nationals to leave the country if possible, or stay indoors.

"British Embassy staff have been on lock down and we are reducing to only essential staff in the country," Britain's Foreign Office said in a statement.

"If you have no pressing need to remain, you should consider leaving (by commercial means), if it is safe to do so."

"Unlike past years there will be no official independence celebrations as the government cancelled the festivities saying it could not afford them."

Teacher Peter Mawa, 40, said he has "mixed feelings" of pride over independence and sadness at the ongoing violence.

"I think we have a reason also to celebrate even if it is only in our houses," he said, planning to stay indoors in case of any further outbreaks of fighting.

"South Sudanese should not lose hope because South Sudan will be okay one day," he added.

Shop attendant John Manut, 35, said it was important to try and celebrate, despite everything.

"This is the day that made us South Sudanese. It reminds us of our struggle to gain our independence."

South Sudan has seen more war than peace since independence in July 2011.

An August 2015 peace deal was supposed to end the conflict but observers say the peace process has stalled while fighting has continued despite the establishment of a unity government.

This week's clashes are the first between the army and former rebels in the capital, where the war broke out in 2013, since both established positions there in April as part of the peace agreement.

Tens of thousands have died in more than two years of civil war, close to three million have been forced from their homes, and nearly five million survive on emergency food rations.

The humanitarian crisis takes place alongside an economic one with the currency collapsing and inflation spiralling out of control. The country's mainstay oil industry is in tatters and regional towns have been razed.