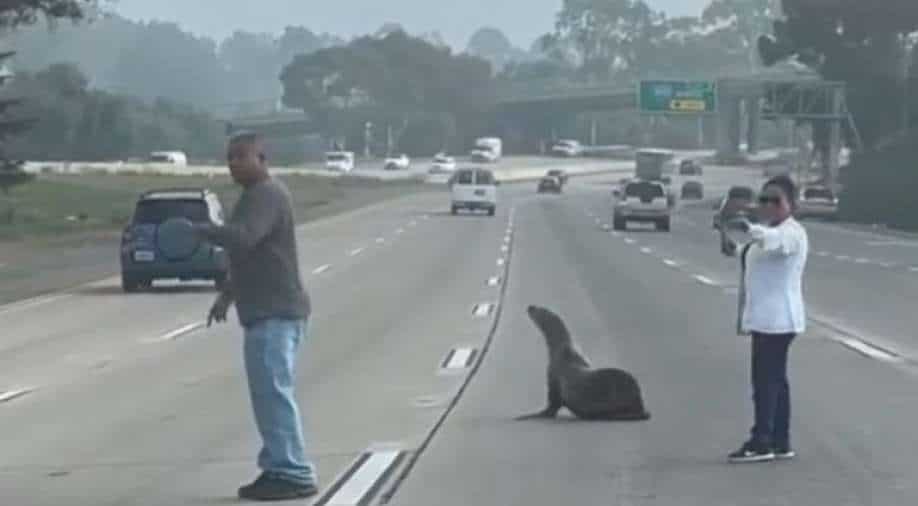 In this picture, motorists can be seen helping the sea lion that wandered on a highway in California Photograph:( Twitter )

A video of people stopping on a busy highway to protect sea lion from traffic in San Diego has gone viral on social media.

Two people parked their vehicles on the side of the road to help the marine animal cross the road safely. They halted the traffic for several minutes to do so.

Drivers didn't hesitate to stop their cars and get out to to protect the sea lion trying to cross route 94 in San Diego Friday morning. The sea lion was found 3 miles from shore and was returned to sea. He's known for showing up in odd places. pic.twitter.com/3QV66OpSOV

The California Highway Patrol said the sea lion crossed four lanes before stopping in the median. Many onlookers captured the video of the incident at 94 East Highway.

This little guy somehow made it to the 94 and 15 this morning. Our officers are there standing by waiting for @SeaWorld to come to the rescue. pic.twitter.com/n7dUJzZKwg

"Exactly how the animal ended up on the highway is still unclear," SeaWorld San Diego said in a statement.

Leslie Fernandes, one of the drivers who stopped to help the animal, said, "We were just trying to keep it from going from one side of the freeway to the other, keep it in the middle."

"Couple of times he got aggressive and tried to come out towards the oncoming traffic," she added.

“I couldn’t believe what I was seeing. It was the craziest thing I’ve ever seen,” another motorist told the local media.

Thank God for these brave people!

Amazing wonderful human beings caring for animals such a bless and good soul.

More and more wild animals are being spotted near human settlements, with boundaries between natural and urban areas getting blurred.