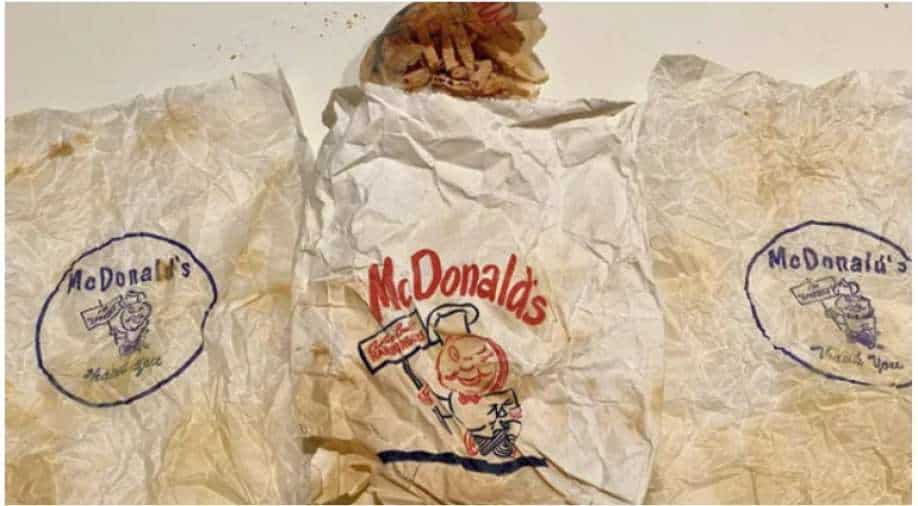 (Image: reddit.com/r/mildly interesting) The McDonald's meal the man found inside the bathroom wall of his house. Photograph:( Others )

Both the man and wife were relieved that plastic wrappers inside the wall contained food items and not anything sinister. Yikes!

There are days when you just want someone to hand you something nice to eat. But mostly in such cases, you are tired after a day's work. Such an urge for some good food is unlikely to tingle your tastebuds when you are, say, renovating your bathroom.

But a man from Illinois got such a surprise treat (?) when he found McDonald's meal inside his bathroom wall. We can probably understand if he wasn't up for a quick bite because the meal was six decades old.

Rob, the homeowner who found the meal, described this strange incident on Reddit.

“While removing a fixture in the bathroom I noticed a piece of cloth stuck behind plaster and pulled it out to show my wife,” he explained.

Their home was built in the year 1959. This means that the meal sitting inside the bathroom wall for more than 60 years.

Both Rob and his wife were relieved because the plastic wrappers contained food items and not anything sinister. Yikes!

The revelation of Mcdonald's meal has sparked a conversation on Reddit.

“I need to check inside my walls now,” said a user. “McDonald's fries never go bad. It's just an urban legend,” a third user commented.

A McDonald's restaurant was just down the road from Rob's house. The restaurant had opened in 1955.

"Our house was built in 1959," Rob told Newsweek Rob. "It is very close to a McDonald's location that opened around then so I assume it found its way into our wall from the original builders."

People on Reddit were curious as to in what state the fries were. Was there a smell? someone asked.

“There was no smell and surprisingly no trace of mice.” Rob said.