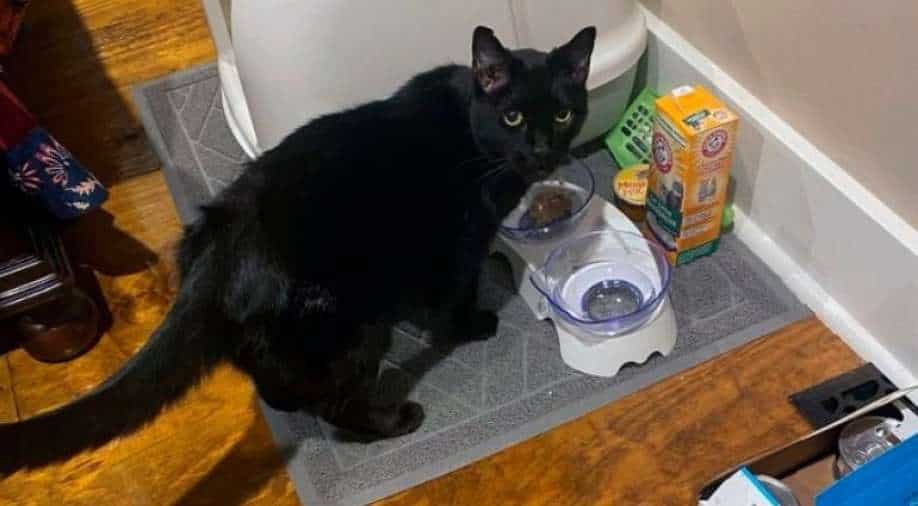 Gibson said he had spent several days trying to locate the black cat with yellow eyes, but had given up after a few days

Sonny 'Hoot' Gibson was standing in the rubble of his three-story office building in downtown Mayfield, Kentucky, nine days after a tornado destroyed it when he thought he heard a faint meow.

The meow made him think of his office cat, Madix, and at that moment, he was encouraged to think that the cat had survived the storms.

Also read | Over 80 people dead as tornadoes rip through US; Kentucky worst-hit

Gibson said he had spent several days trying to locate the black cat with yellow eyes, but had given up after a few days. The cat liked to greet customers at his business.

However, the tornado itself and its aftermath inflicted so much destruction that he wondered how anything could've survived.

Gibson was standing in the rubble when he heard the noise on Sunday afternoon.

Firstly, I thought I heard a meow, and then I thought my mind was tricking me, so I called his name and he meowed again, says Gibson.

As the noise was muffled, he called some of his colleagues and they came to help search for Madix. After a short time, the team found the cat in a hole below the rubble.

I was amazed by how incredible it felt to hold him in my arms, Gibson said. In this nine-day period, he probably used up approximately eight of the nine lives cats have, he added.

Madix was largely unharmed, except that he was starving and thirsty. The cat was taken by Gibson to his home, where he will live the rest of his life as a house cat.

In Mayfield, where a long-track tornado ravaged the community, the story of Madix the survivor is becoming increasingly popular.

Hearing this story is a blessing because people can see that great things can come from awful situations. If it can inspire even one person, then Madix has accomplished his mission on this planet, remarked Gibson.

Mayfield in Kentucky was hit hard as several areas in the US suffered heavy damages. Reports say Kentucky was struck by the worst tornado in over a century.

A state of emergency was declared in Kentucky and national guards were brought in for rescue effort with several fatalities reported in the Amazon distribution centre in Illinois.