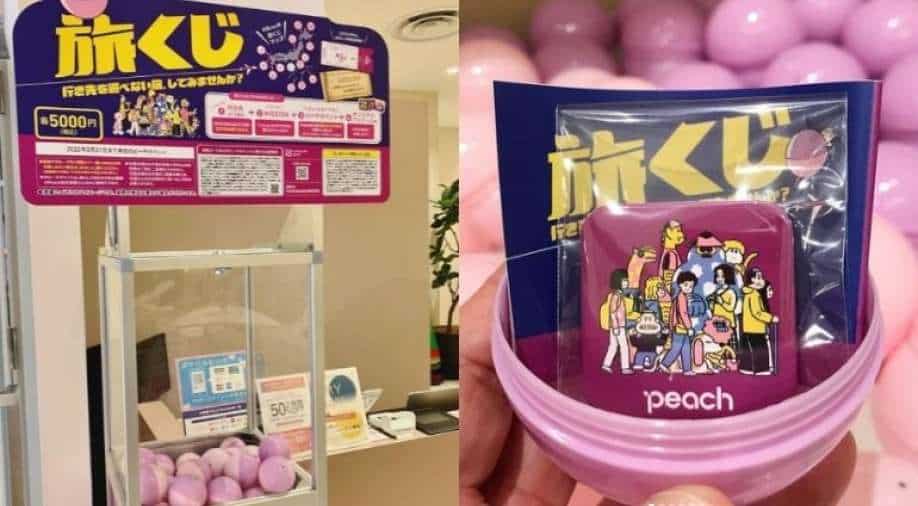 In essence, this out of the box marketing move involves giving travellers a capsule, which will contain a surprise travel destination

Across the globe, COVID-19 has brought to their knees many industries crucial to the survival of people, countries, and economies.

The aviation industry was among the hardest hit, as the virus gripped the travel and tourism industries. While the world is recovering from the deadly virus, this industry is also working to rebuild itself.

Airlines are using a variety of methods to get back on track, with discounts, cheap fares remaining to be the most widespread and well-known way of attracting customers.

However, a budget airline located in Japan, Osaka has taken the most creative and unconventional approach in the aviation industry. Observing the popularity of 'Gachapon' or 'Gashapon,' a vending machine that dispenses capsule toys, Peach Aviation Limited developed a vending machine that holds the potential of getting the airlines its much-needed boost.

In Japan, gachapon machines are extremely popular. Random capsules with cute Japanese collectables are dispensed by these machines. Japanese people are enthralled by the thrill of not knowing what they will receive each time.

Also read | Facebook plans on hiring 10,000 people in EU to work on metaverse

Peach Aviation Limited has incorporated this very thrill. The airlines have modified these popular vending machines and adjusted the dispenser so that instead of toys and collectables, capsules containing a variety of destinations are given out.

In essence, this out of the box marketing move involves giving travellers a capsule, which will contain a surprise travel destination.

One go at the machine costs 5,000 Japanese yen or $44, and customers receive 6,000  Japanese yen i.e., $53 worth of mileage points. These points can only be used towards the destination they won. The airline has arranged tours for areas such as Sapporo, Nagoya, Fukuoka, and Naha through its domestic flights.

Also read | With $230 billion net worth, Musk is now richer than Gates and Buffett combined

These points can then be exchanged for airfare using the code printed on a piece of paper inside the capsule. In addition, they get a miniature badge and a mission for when they reach their destination.

Although some employees thought the promotion idea wouldn't work, the vending machine idea proved to be a success in Japan. The airline has already sold around 3,000 capsules in the past few months, with sales averaging 150 a day, according to official data.