Boom year for brides and grooms: 2022 will see the most weddings since 1984 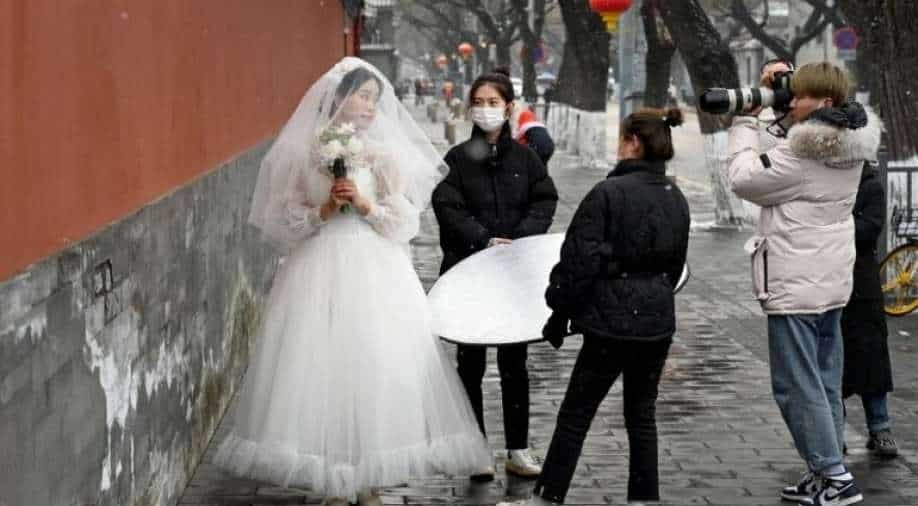 A woman (L) poses for wedding photos outside the Forbidden City on a snowy day in Beijing Photograph:( AFP )

The rapid spread of the Omicron variant of the coronavirus, has failed to put a damper on wedding celebrations.

As per The Wedding Report, a market research firm, there will be an estimated 2.5 million weddings in 2022, the highest in the US since 1984. In these people will spend an average of approximately $24,500.

Founder of The Wedding Report Shane McMurray said, "To be honest, this isn’t really growth. This is pent-up demand."

Also read | In a first, Indian couple to host wedding reception in Metaverse

As authorities have tightened restrictions across the world in an attempt to control the spread, couples planning to wed had faced three options - postpone, downsize or attempt to carry on as normal.

Many businesses are reporting that the second half of the year is the busiest for them according to the survey.

The expenses incurred in pandemic weddings has increased due to inflation, with 15 per cent of couples saying they are still cutting budgets by as much as 28 per cent.

As a result, people who preferred not to delay tying the knot, even though guests could not attend, got married on Zoom or had a metaverse wedding.

Also read | Why do men want 'Marriage Strike'? A social media debate is raging in India over criminalising marital rape

Last month, inflation in the US hit its highest level in over 40 years, with a 7 per cent increase over the previous year.

"It’s not sustainable for human beings to do this," says Laine Palm, a wedding planner and coordinator based in Minneapolis.

"We’re tired, and we can’t keep doing three weddings in a weekend, which is what we’re doing now."

The report suggests that after 2023, things should start to normalise, and the number of weddings and spending will go back to pre-pandemic era.