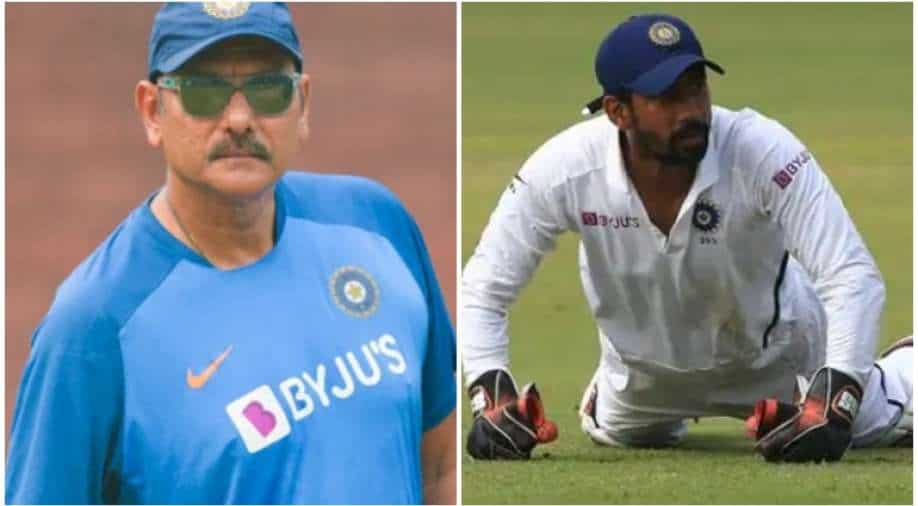 Following the Wriddhiman Saha row, ex-Team India head coach Ravi Shastri has opened up on the relationship between players and media in current times. Here's what he said:

After being dropped from India's Test squad, Wriddhiman Saha made heads turn courtesy his stunning revelation. Saha, who has represented India in 40 Tests, revealed that he is being threatened by a 'respected journalist' after he didn't respond to his interview request.

Taking to his official Twitter handle, Saha shared a screenshot of the conversation with the journalist and wrote, "After all of my contributions to Indian cricket..this is what I face from a so-called “Respected” journalist! This is where the journalism has gone."

Following the recent turn of events, ex-India head coach Ravi Shastri opened up on the Saha row. He dwelled on the relationship between players and journalists in the current era. Speaking during the launch of veteran journalist Khalid A-H Ansari's memoir, 'It's a Wonderful World', Shastri said, “It's changed from the time we played."

"The equation we had with journalists was far, far better than the equation you see with the boys today. I was part of the dressing room for the past seven years. And I don’t blame (the players). The spotlight that is there on today’s players is nowhere like what it was on us. We (only) had the print media… there was TV that had just started," he stated.

Revealing how he asked the Indian players to deal with the press during his coaching tenure, Shastri asserted, "We've tried to discuss it with them. Speak as much as you can to the media but make sure it's a proper kind of press conference, take everyone's questions at one go, because what happens is a lot of things are taken out of context these days. I'm being honest about it. Because of the competition that exists (between media organisations).

"As a result, the player has no choice but to go into a shell. He says, 'I'd rather look within, focus on the game, let my cricket do the talking, and once I'm done and dusted, I can speak to whoever I want to,'" added the former Indian all-rounder.