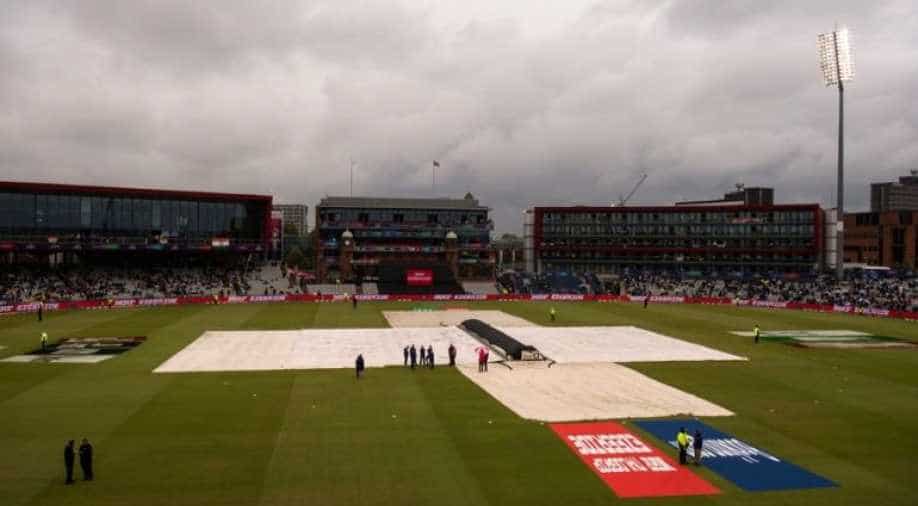 The covers are on under grey skies as rain stops play in the 2019 Cricket World Cup first semi-final between India and New Zealand at Old Trafford in Manchester. Photograph:( AFP )

The first semi-final of Cricket World Cup 2019 between India and New Zealand, which is underway in Manchester's Old Trafford, has been stopped due to rain.

Opting to bat first, New Zealand reached 211/5 off 46.1 overs before the match was halted.

The umpires will try everything they can to complete the game today and have at least a minimum of 20 overs per innings as there is an additional two hours' playing time to complete the match.

Although, if the conditions don't allow to get the match started then play will resume tomorrow, which is scheduled as the reserve day for today's match.

But the reserve day will only come into operation if the minimum 20 over-per-side match needed for a result under the Duckworth-Lewis method cannot be finished.

In that case, the match would continue Wednesday from where it left off rather than be re-started.

But if a 20 overs per side match cannot be completed on Wednesday as well, India would reach the final owing to their better finish in the 10-team group stage.

In the match, Ross Taylor was 67 not out and Tom Latham three not out when persistent rain worsened sufficiently for the umpires to take the players off the field at 2:00pm (1300 GMT) with 23 balls of the scheduled 50 overs in the innings left.

India's pacer Jasprit Bumrah led a disciplined bowling attack as in his eight overs, he took 1 wicket and gave 25 runs.