With Siraj, Harshal and Avesh in the mix, India's pace attack shaping up well for T20 World Cup 2022 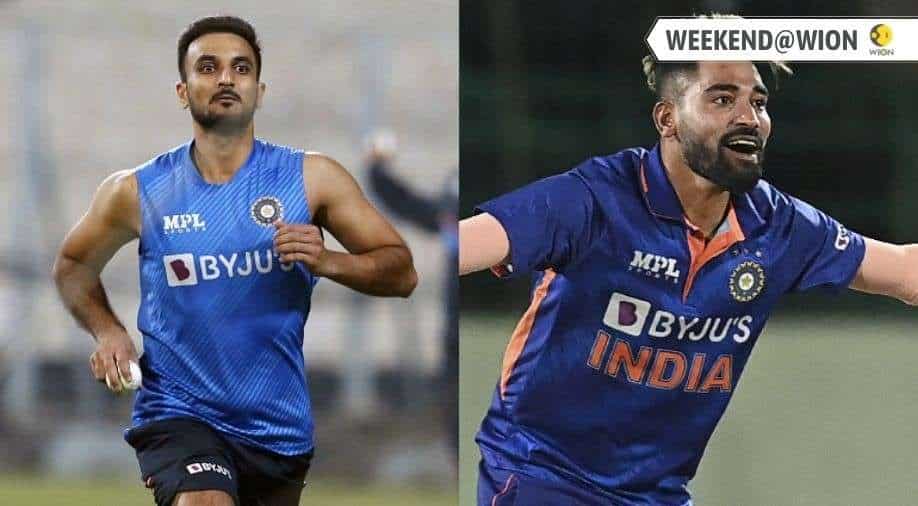 The likes of Mohammed Siraj, Avesh Khan and Harshal Patel have rejuvenated India's pace attack ahead of the T20 World Cup 2022.

India's pace attack had undergone a massive transformation in Tests under Virat Kohli a  few years ago and there has been no looking back ever since. India ave always craved for away for all kinds of pacers but have lacked serious quality in the fast-bowling department. However, the days of misery are long behind as the Men in Blue now boast of some brilliant fast bowling depth across all formats of the game.

From a tearaway pacer in Jasprit Bumrah to the likes of Deepak Chahar and Bhuvneshwar Kumar, who can swing the ball from the word go, India have both quality and versatility in their pace department. The rise of the likes of Mohammed Siraj, Harshal Patel, Avesh Khan and Prasidh Krishna is only going to make India's pace attack more deadly in the days to come.

After a disappointing show at the T20 World Cup 2021 last year, where the Indian pacers struggled massively in picking regular wickets against quality opposition, India have added some fresh faces to their pace arsenal, which has been firing all cylinders in limited-overs cricket.

While Bumrah has remained the spearhead with his remarkable consistency and ability to nail yorkers at will, Bhuvneshwar seems to have found his mojo back after enduring a rough patch in his international career. However, it is the new blood in the Indian team's pace department which looks set to make India a formidable bowling unit when they travel to Australian shores for the T20 World Cup next year.

Harshal Patel's rise has been nothing short of a fairy tale. A tall seamer with a brilliant outswinger, Harshal's entry into the Indian team came after his remarkable campaign in IPL 2021 where he finished as the highest wicket-taker. While his confidence has shot up, he has matured into a fearless bowler and has been effective in the death as well as with the new ball.

A powerplay bank in a true sense, Deepak Chahar's value in the current Indian team can never be undermined. He might have missed out on making the cut for the T20 World Cup last year bit might be one of the first names in the squad if fit this year. Chahar's ability to swing the ball from the word go and provide crucial breakthroughs in the powerplay make him a valuable asset. He can also be very handy with the bat lower down the order.

Mohammed Siraj was once considered an outcast at Royal Challengers Bangalore (RCB) and there were serious questions over his quality. In the last couple of years, the right-arm pacer has answered his critics and shut them down permanently with some memorable performances across all formats. He can swing the ball into a right-hander and has also got a great bounce up his sleeves. However, what makes Siraj stand out is his ability to bowl tirelessly and not let his pace drop throughout.

Another right-arm pacer, who has been around the corner for a while now. Prasidh Krishna was an unknown entity when Kolkata Knight Riders (KKR) gave him a chance in the Indian Premier League (IPL) and he has since developed into a world-beater. Krishna can nail yorkers and hit the lengths consistently while bowling at an impressive pace. He also has the ability to bowl bouncers at will and is all set to be groomed further.

Avesh Khan is a versatile pacer, who can move the ball new ball in and away from the batter. He can also bowl brilliant yorkers and has good pace. In IPL 2021, Avesh proved why he can be one for the future with sensational performances throughout the season. While he was on the money with the new ball, Avesh also bowled exceptionally well in the death overs. He recently made his India debut and looks set to be included in the team's plans for the T20 World Cup 2022.