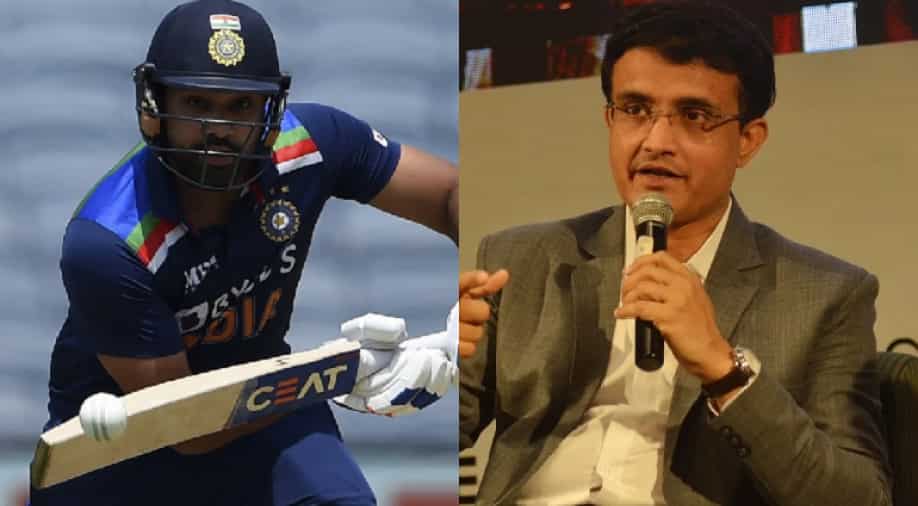 BCCI president Sourav Ganguly explained why Rohit Sharma was selected to take over as India's ODI captain from Virat Kohli while lauding him for his captaincy record.

Sourav Ganguly has backed Rohit Sharma to succeed as India's new ODI captain and has explained why the selectors felt he was the right choice for the important role. Kohli was sacked as ODI captain of the Indian team last week with Rohit taking over. The decision was confirmed by the BCCI in a tweet while also announcing India's squad for the upcoming Test series against South Africa.

Citing Rohit's phenomenal captaincy record in the Indian Premier League (IPL), Ganguly said the selectors backed him as he had the credentials of a great leader. Ganguly also highlighted how Rohit led India to Asia Cup triumph in 2018 which he felt spoke volumes of the team strength at the time under the Hitman's captaincy. Ganguly believes Rohit will help India spark a turnaround in major tournaments.

"Of course. That’s why the selectors have backed him. He will find a way to do well and I hope he does. His record for IPL(Mumbai Indians) is phenomenal… winning five titles. He captained India in Asia Cup a couple of years ago which India won as well, and India won without Kohli. To win a title without him spoke volumes of that team’s strength. So he has had success in big tournaments. He has a good team. So hopefully they can all turn it around," Ganguly said in an interview with News18.

Kohli had taken over as India's full-time limited-overs captain in 2017 from former captain MS Dhoni. While he led the team exceptionally well, Kohli failed to inspire India to an ICC trophy during his stint as the leader of the side. India reached the final of the Champions Trophy in 2017 and the semi-final of the ODI World Cup in 2019.

Also Read: Rohit heaps praise on Kohli: He led from the front, there was determination to win every game

In T20 World Cup 2021, the team endured a disappointing campaign as they failed to make it to the knockout stages. Kohli led India in three major ICC tournaments, failing to win any of them as his stint as captain ended trophyless.

Ganguly said the selectors were not in favour of having two captains in white-ball cricket which led to the decision of Rohit replacing Kohli in ODIs as well after T20Is.

“It’s a call that the BCCI and the selectors took together. Actually, the BCCI had requested Virat to not step down as the T20I skipper, but obviously, he did not agree. And the selectors then did not feel it right to have two different captains for two white-ball formats," said the BCCI president.