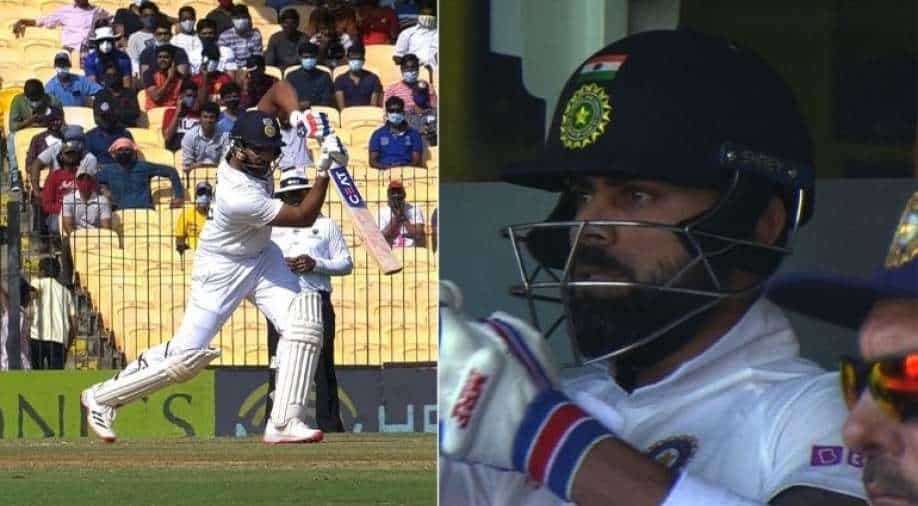 Kohli, who was all padded up in the dressing room, was overjoyed by the shot and cheered for Rohit Sharma.

After Shubman Gill's dismissal, Rohit Sharma and Cheteshwar Pujara were under pressure to stabilise the Indian innings in the second Test against England. However, Rohit Sharma put India off-the-mark with a majestic drive through the extra cover boundary in the first ball of the second over, off Stuart Broad.

Kohli, who was all padded up in the dressing room, was overjoyed by the shot and cheered for Rohit Sharma.

Despite Kohli's dismissal, vice-captain Ajinkya Rahane and Rohit Sharma's 100-run stand helped India to 189 runs at the loss of three wickets by the end of the second session.

Rohit Sharma scored his 7th Test century after 9 innings (15 Months) and is going strong with Rahane.

Virat Kohli opted to bat after winning the toss. Virat and Co. currently trail 0-1 in the four-match series, and a loss in the second Test will rule the side out of the qualification race for the final of the World Test Championship.

Team India have made three changes ahead of the match, they have rested Jasprit Bumrah and brought in Mohammed Siraj. Left-arm spinner Axar Patel, who is making his Test debut, and Chinaman Kuldeep Yadav replace left-arm spinner Shahbaz Nadeem and off-spinner Washington Sundar, respectively.