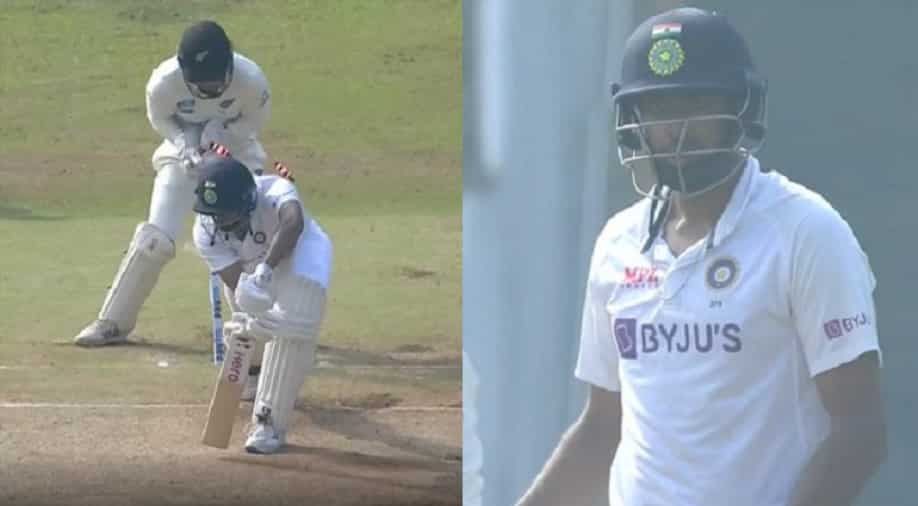 R Ashwin went for a review despite being clean bowled in 2nd Test against New Zealand. Photograph:( Twitter )

Indian spinner R Ashwin had a brain fade moment while batting out in the middle in the second Test against New Zealand as he went for a review after getting bowled.

Indian spinner R Ashwin had a brain fade moment in the middle of the pitch while batting during India's first innings on Day 2 of the ongoing second Test against New Zealand on Saturday. Ashwin ended up going for a review after being bowled as many were left baffled by the spinner's decision. The incident happened on the penultimate delivery pf the second over on Day 2 of the Mumbai Test.

Spinner Ajaz Patel, who has been bowling brilliantly, had picked up the wicket of Wriddhiman Saha on the previous delivery and cleaned up Ashwin on the next ball. It was a slower one from Patel which drifted inside and beat Ashwin's defence to crash into the stumps.

However, Ashwin probably thought the New Zealand players were celebrating a stump out decision and ended up signalling for DRS to everyone's surprise. Ashwin's brain-fade moment soon became a talking point on Twitter with many trolling the Indian spinner for his decision to go for the DRS while ignoring that he had been bowled.

Former Australian cricketer Brad Hogg took a dig at Ashwin for his unnecessary review and shared a meme with the caption - "Ashwin reviews being bowled?????". In another tweet, Hogg slandered the Indian spinner for wasting a review for Team India in the Test match and stated that a batter should consult his partner at the non-striker's end before opting for a review.

"Surely India lose a review with Ashwin reviewing being bowled. If your unsure of why your out you consult your partner not be given a hint by the umpire," said Hogg.

Surely India lose a review with Ashwin reviewing being bowled. If your unsure of why your out you consult your partner not be given a hint by the umpire. #INDvzNZ

Talking about India's first innings, the hosts lost the wickets of Saha (27) and Ashwin (0) in quick succession in the first session on Day 2 of the Test match. Mayank Agarwal, who was unbeaten on 120 at stumps on Day 1, added 30 runs to his tally before being dismissed on 150 by Patel, who picked up his seventh wicket.

Agarwal added 67 runs for the seventh wicket with Axar Patel, who is currently nearing his half-century. India have already crossed the 300-run mark and are in a strong position in the Test match.