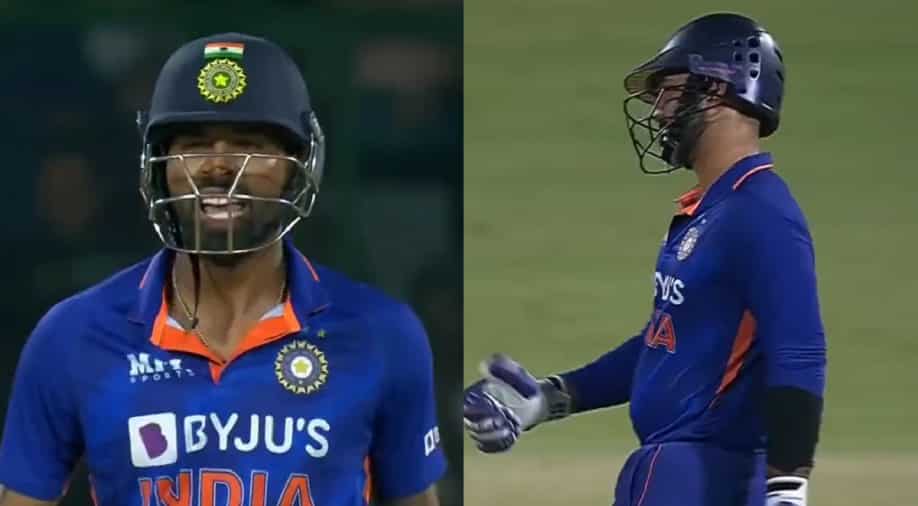 Hardik Pandya denied Dinesh Karthik a single in the final over of 1st T20I vs SA. Photograph:( Twitter )

Hardik Pandya surprisingly refused a single to Dinesh Karthik during the final over of India's innings in the first T20I against South Africa on Thursday (June 09).

South Africa pulled off a stunning run-chase of 212 runs to beat India by seven wickets in the first T20I of the five-match series at the Arun Jaitely Stadium in New Delhi on Thursday (June 09). It was a brilliant batting performance from the Proteas, who rode on David Miller's unbeaten 64 off 31 balls and Rassie van der Dussen's 75 not out off 46 balls to chase down 212 runs with 5 balls to spare and give the visitors a 1-0 lead in the series.

Despite the absence of the likes of Virat Kohli, Rohit Sharma, Jasprit Bumrah and KL Rahul, India named a strong playing XI under captain Rishabh Pant for the series opener. Ishan Kishan and Ruturaj Gaikwad got the team off to a brilliant start with a 57-run stand for the first wicket before the likes of Pant, Shreyas Iyer and Hardik Pandya all made crucial contributions to propel India to 211 runs.

While it was a great batting effort from the Indian team with Kishan playing a standout knock of 48-ball 76, Hardik's actions in the final over of the innings left many baffled on social media. Hardik, who was batting with Dinesh Karthik in the 20th over, surprisingly denied the wicket-keeper batter a single on the penultimate ball of the final over.

Facing Anrich Nortje in the 20th over, Hardik guided a full-length delivery from Nortje towards deep mid-wicket on the 5th ball. A single was easily available but Hardik decided against taking it leaving Karthik seemingly dejected on the other end. The incident soon became a major talking point on social media with fans bashing Hardik for the decision.

Didnt like the way Hardik Pandya denied strike to Dinesh Karthik..Com'on man he isnt a bowler..Probably he is one of best and most experienced finisher...

Denying strike to DK? Conceding a dot? No matter your form, no matter the score, not good Hardik. Even AB de Villiers at 98 would take that single. #INDvsSA

Hardik Pandya denying Dinesh Karthik the strike on the last ball as if DK is a tailender.... #bcci #INDvsSA #INDvSA #SAvsIND #TeamIndia #DK was literally like - pic.twitter.com/z18qYRwV67

Hardik Pandya not giving strike to Dinesh Karthik at the end of the innings is sheer arrogance. #INDvsSA #DK #BCCI

Both Karthik and Hardik made their return to the Indian team after impressing in the recently-concluded IPL 2022. While Hardik was the highest run-getter for his side Gujarat Titans, Karthik took the season by a storm with his finishing exploits for RCB. Both the batters will be battling for the finisher's role in the Indian side in the lead up to the T20 World Cup next year.

While Hardik spent a long spell on the sidelines recovering from a back injury post the conclusion of the T20 World Cup 2021 last year, Karthik had last played for India during the ODI World Cup in 2019. After losing the first game by seven wickets, India will be hoping to bounce back when they lock horns with South Africa in the second T20I of the series on Sunday (June 12).