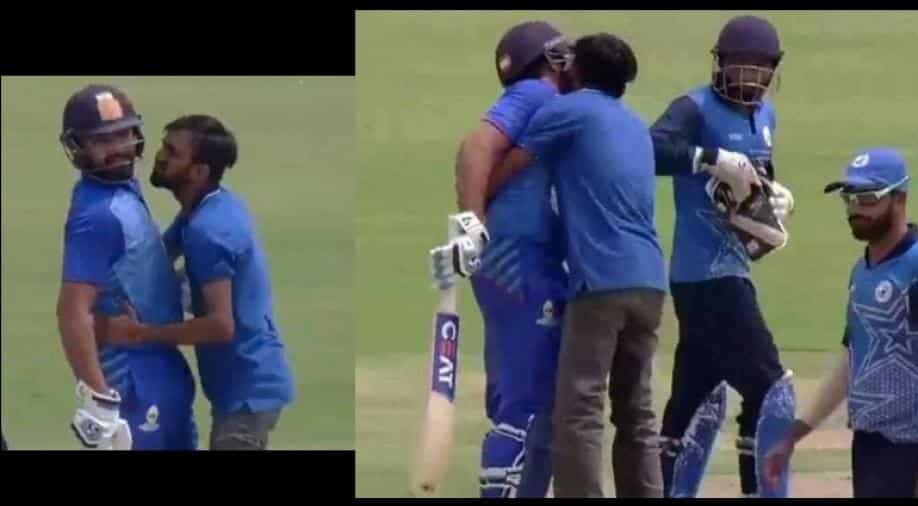 Mumbai registered an easy nine-wicket win over Bihar in a lopsided affair in the quarter-finals to make it to the semis at the Just Cricket Academy Ground in Bengaluru in the Vijay Hazare Trophy 2018-19 quarter-final.

While the match became more interesting when a male fan invaded the pitch and hugged Rohit Sharma.

The fan attempted to touch Rohit's feet and also kissed him through the helmet.

The incident happened before the beginning of the 11th over when Mumbai needed 19 runs to win the match.

An overenthusiastic male fan ran onto the pitch and touched Rohit's feet. He then hugged and even kissed him.

Rohit's wife Ritika Sajdeh took the incident sportingly and shared the newspaper clipping as her Instagram story and tagged spinner Yuzvendra Chahal saying, "You and I both have competitions."

Recently, India's skipper Virat Kohli encountered a similar incident when a male fan breached security to meet him at the Hyderabad cricket ground during the recently concluded second Test between India and West Indies.

The fan managed to get the selfie. He did not get the kiss — security managed to stop him (and Virat pulled back) before he could plant a kiss on Virat's cheek.

Formidable Mumbai got a major boost for the crucial semi-final of the Vijay Hazare Trophy tournament with the availability of three top players, two of whom missed the whole or part of the league phase.

Rohit Sharma, teenage sensation Prithvi Shaw and seasoned batsman Ajinkya Rahane are the three batsmen who will turn out for Mumbai in the semis.

Mumbai's chief selector and former India pacer Ajit Agarkar confirmed that all the three players were available to play in the semis.

The semi-finals of the national One-Day International (ODI) tournament will be played on October 17 and 18.