WATCH: Controversy erupts as Savita Punia's save ruled out after clock howler in India-Australia semi-final 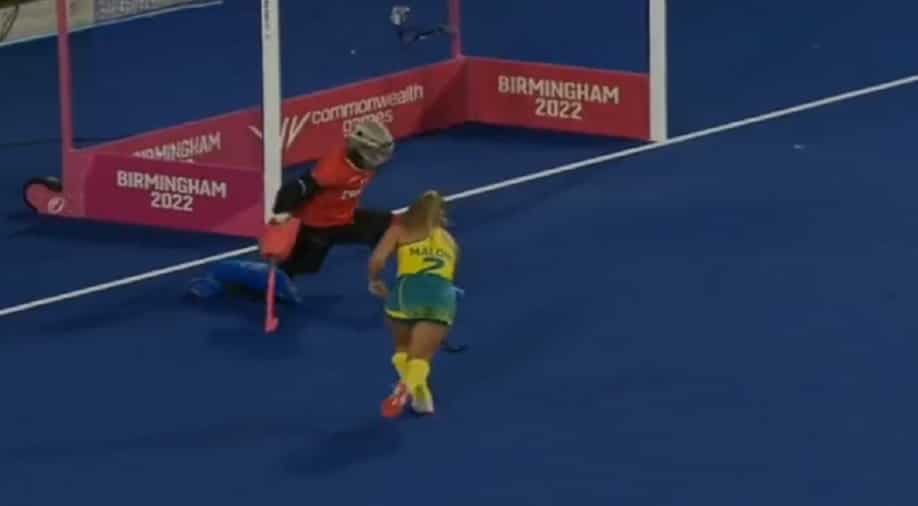 Savita Punia's save was ruled out in the India-Australia semi-final at CWG 2022. Photograph:( Twitter )

Indian goalkeeper Savita Punia's save was ruled out during the penalty shoot-out in the semi-final against Australia at the Commonwealth Games 2022 on Friday. A huge controversy erupted after the decision which was a result of a clock howler.

The women's hockey semi-final clash between India and Australia was marred with controversy after Indian goalkeeper Savita Punia's save was ruled out during the penalty shoot-out after the game ended in a 1-1 draw at the end of regulation time. India lost 0-3 in shoot-out to go down in the semi-final and bow out of the ongoing Commonwealth Games 2022 after a heartbreaking defeat.

Australia took the lead in the semi-final through Rebecca Greiner, who scored in the 10th minute before India fought back in the semi-final. Vandana Kataria scored the equaliser in the 49th minute to pull India back level at 1-1. Australia came close to winning the all-important clash with two penalty corners in the final minute of the game. However, Punia made two brilliant saves to force the game into a shoot-out.

Controversy erupted during the penalty shoot-out after Punia saved Australia's first attempt from Ambrosia Malone but it was ruled out as the match official had forgotten to set the clock. The penalty was re-taken by Malone, who managed to score in her second attempt and put Australia ahead.

Penalty miss hua Australia se and the Umpire says, Sorry Clock start nahi hua. Such biasedness used to happen in cricket as well earlier till we became a superpower, Hockey mein bhi hum jald banenge and all clocks will start on time. Proud of our girls pic.twitter.com/mqxJfX0RDq

India suffered a heartbreak in the penalty shoot-out as they ended up missing their first three attempts while Australia managed to convert their first three chances to win 3-0. Lalremsiami, Neha Goyal and Navneet Kaur missed their chances for India as the Savita Punia-led women's team crashed out of the tournament.

Captain Punia spoke about the clock howler post her team's semi-final loss and said the decision to allow Australia to retake the penalty was a tough one to take but it is part of the game so the team moves on.

"It was a very close match and sometimes these decisions don’t go your way, it becomes tougher. The first stroke was asked to be retaken. It was tough for us but, at the same time, these are part of the game. We have to move on," Punia said on Sony Sports.

"It will take today’s time (to get over the loss in the semi-final). It was a close match, we had worked hard. But now, the bronze medal match is very important. We are aware of it. As a captain and as a senior player, it’s my responsibility to motivate the players and make sure they are ready for the bronze medal match," he added.