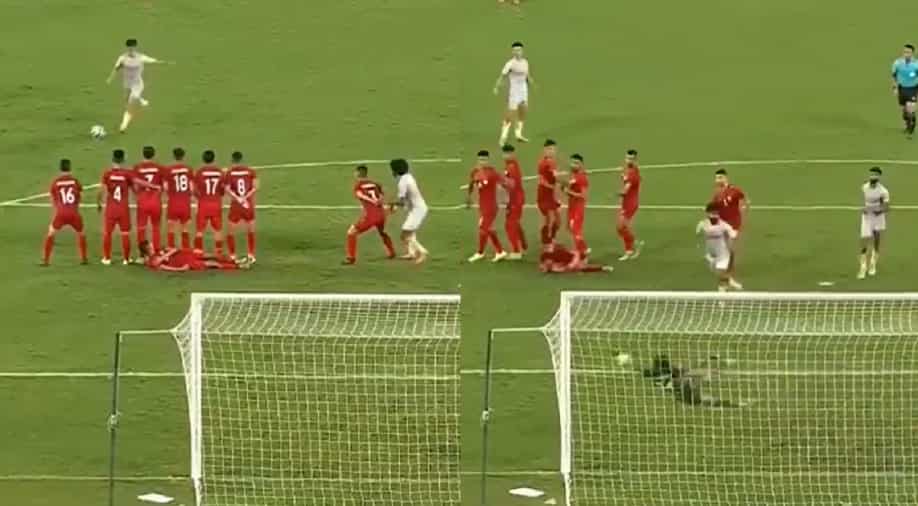 Sunil Chhetri continues to prove age is just a number with his brilliant performances for the Indian football team despite being 37. The Indian captain scored an amazing free-kick to help India beat Afghanistan 2-1 in the AFC Asian Cup qualifiers in Kolkata on Saturday. It was an exceptional curling effort from Chhetri which comfortably beat the Afghanistan goalkeeper handing India the lead in the crucial game.

Igor Stimac's men had headed into the clash against Afghanistan on a confident note after a 2-0 win over Cambodia in their last game. They managed to bag their second win on the trot after outclassing Afghanistan at the Salt Lake Stadium in Kolkata on Saturday.

It was Chhetri who scored the opener for India in the 86th minute with a brilliant free-kick. The Indian skipper curled once past the Afghanistan defence and their keeper to slot it home and put India 1-0 ahead. The 37-year-old's magical goal left many in awe on social media as fans hailed the Indian legend.

Chhetri's goal seemed to have secured India the victory with just a few minutes left for the full-time whistle. However, Afghanistan were quick to bounce back and level the score after Zubayr Amiri scored a header just a couple of minutes later.

Sahal Abdul Samad's injury-time strike earned India a thrilling 2-1 win against Afghanistan to keep their hopes of qualifying for next year's Asian Cup finals alive. Samad slotted one into the bottom corner of the net in the 92nd minute to seal the deal for the hosts at the Salt Lake after Afghanistan's equaliser.

With the win, India remain on top of Group D with Hong Kong at six points each. The hosts will take on Hong Kong in their next encounter at the Salt Lake Stadium in Kolkata on Tuesday. India will look to keep their winning run intact in the game but even a draw will be enough to help both nations qualify for the finals.