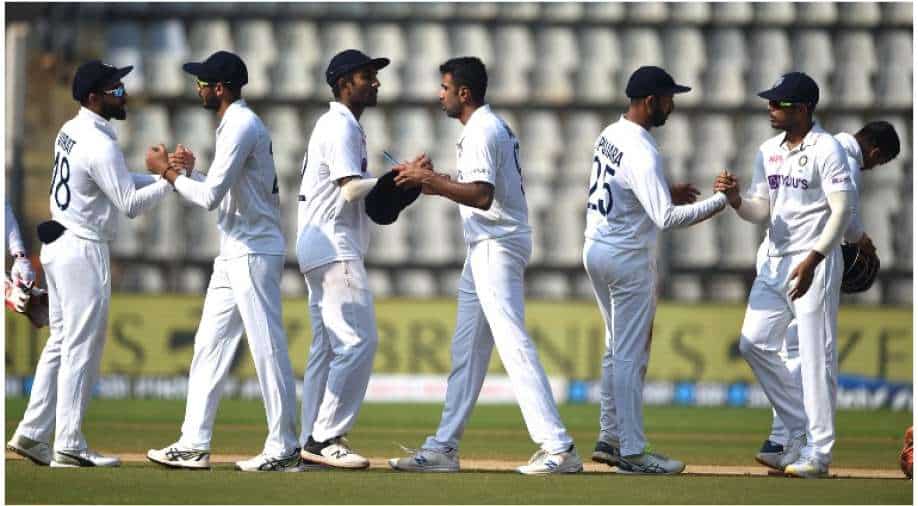 Team India demolished New Zealand by 372 runs to win the Mumbai Test and clinch the series 1-0. With this series win, India have now bagged their 14th successive Test series win on home soil.

Team India beat New Zealand in the second and final Test at the Wankhede Stadium, Mumbai on Monday morning (December 6). Resuming Day 4 with Virat Kohli & Co. requiring 5 more wickets to win the series, the home side didn't waste any time and wrapped up the proceedings within a session to bundle out the Kiwis for 167, in pursuit of 540, and win the Mumbai Test by 372 runs.

Opting to bat first, India rode on Mayank Agarwal's 150 to post 325 all-out. In reply, NZ fell like nine pins for 62 and gave a whopping first-innings lead to the hosts. India then declared their second innings for 276-7 and dismissed the Black Caps for 167 to win the series and regain the top spot in the ICC Test Rankings.

In this way, India also went onto win their 14th successive series in the purest format at home. India's last Test series loss as hosts came versus England in late 2012 (under MS Dhoni)

In the WTC points table, India are now at the third position with 58.33 win percentage. New Zealand, on the other hand, find themselves at the sixth spot.

Kohli told the broadcasters at the post-match presentation, "To come back with a win again, it's a great feeling and a clinical performance. You want individuals to step up. The first Test was good, and it was a clinical performance here. We discussed the performance and the opposition played out a good draw. The bowlers tried all their best, but the Kiwi batsmen stuck it out really well in Kanpur. Here there was more bounce and the fast bowlers got assistance as well, so it gave us a better chance to win the Test match. The mindset is the same to take Indian cricket forward, even with the new management. It's important to keep the standards of Indian cricket and make sure it's always growing. "

India will now head to South Africa for a three-match Test series, starting from December 26 in Centurion. It will be followed by three ODIs whereas the T20Is will be held later in 2022.