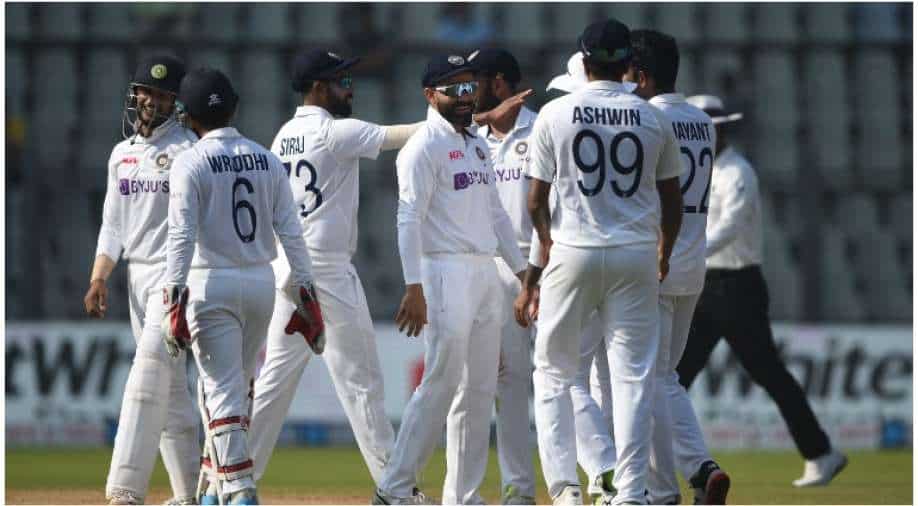 Virat Kohli-led India have regained the No. 1 spot in ICC Test Rankings after beating World Test champions New Zealand in the two-match Test series at home.

Team India demolished New Zealand by a whopping 372-run margin in the second and final Test to win the series 1-0. After a drawn first Test, Tom Latham-led Black Caps fell like nine pins in the series decider following their no-show with the bat in the first innings.

Opting to bat first, India rode on Mayank Agarwal's 150 to post 325 all-out. NZ spinner Ajaz Patel made heads turn with his ten-wicket haul, being only the third bowler to the milestone, but the Kiwis failed to get going with the willow in their first innings to fold for 62. Courtesy a solid first-innings lead, India declared at 276-7, setting up a daunting 540-run target for the visitors.

In reply, NZ were bundled out for 167 all-out, courtesy R Ashwin and Jayant Yadav's four-fers, as they lost by a huge margin. With this win, India not only won their 14th successive series at home in the longest format but also regained the No. 1 spot in ICC Test Rankings.

India, with 124 points, are now three rating points ahead of World Test champions NZ, 121, in the Test Rankings. On the other hand, the Ashes rivals Australia and England are on third and fourth spots respectively.

At the post-match presentation, Kohli opined, "To come back with a win again, it's a great feeling and a clinical performance. You want individuals to step up. The first Test was good, and it was a clinical performance here. We discussed the performance and the opposition played out a good draw. The bowlers tried all their best, but the Kiwi batsmen stuck it out really well in Kanpur. Here there was more bounce and the fast bowlers got assistance as well, so it gave us a better chance to win the Test match. The mindset is the same to take Indian cricket forward, even with the new management. It's important to keep the standards of Indian cricket and make sure it's always growing. "

Dravid, on the other hand, told the broadcasters, "Good to finish the Test series on a winning note, came very close in Kanpur, but couldn't take that last wicket. Credit to the team, they have pulled themselves back from tough situations, and were a bit disappointed at not finishing it off in Kanpur. Good to see the boys step up and take their opportunities, we were missing a few seniors, but the youngsters have taken their chances."

India will now shift their focus to the three Tests versus South Africa in the African nation, from December 26, whereas Kane Williamson & Co. will host the Bangla Tigers, later this month, for a two-match Test series.