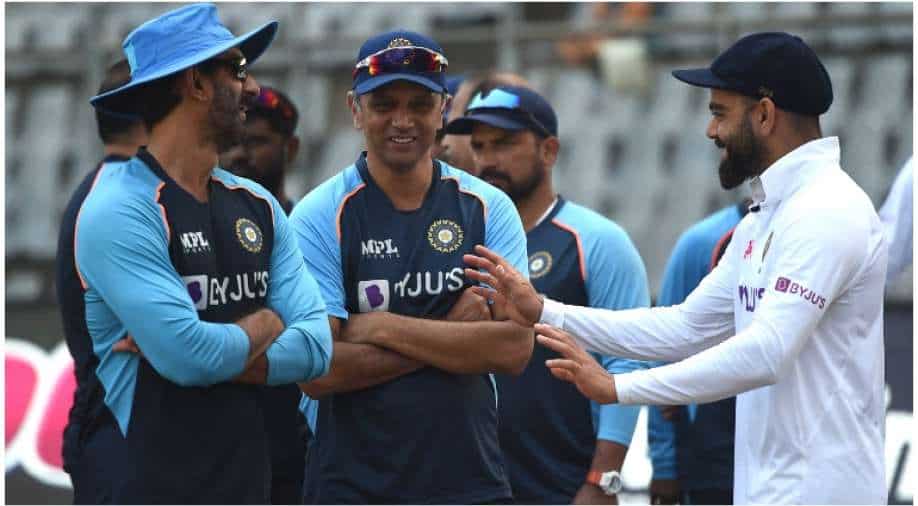 India thrashed New Zealand by 372 runs (their biggest win in terms of runs) to win the second and final Test, at the Wankhede Stadium, Mumbai, on Monday morning (December 6). After setting a daunting 540-run target, Virat Kohli-led India needed 5 more wickets to win the Test match when the fourth day's play resumed on Monday. It took the hosts less than a session to topple the Kiwis and win the series 1-0.

Thus, this became India's first-ever Test series win under new coach Rahul Dravid. His predecessor Ravi Shastri, and his outgoing support staff members such as bowling coach Bharat Arun and fielding coach R Sridhar, did a splendid job in making India a daunting line-up both at home and away in Tests. The previous support staff members also guided India to wholesome success in white-ball formats. Hence, Dravid and his support staff are expected to deliver in same lines and take the national side to ICC titles as well.

Ending his first-ever series as full-time head coach, Dravid would be pleased on how India thrashed the Black Caps to win the Test series 1-0 (after whitewashing the visitors in the three T20Is). Forming a new partnership with Indian great Dravid, India's Test and ODI skipper Kohli opined on the new set of support staff and told at the post-match presentation, "The mindset is the same to take Indian cricket forward, even with the new management. It's important to keep the standards of Indian cricket and make sure it's always growing."

India also moved to the top spot in ICC Test rankings following their domination of the Kiwis in the Mumbai Test. Kohli-led India will now travel to South Africa for three Tests and equal number of ODIs, starting from December 26.

Kohli-Dravid pair will be eager to lead India to their first-ever Test series win in the African nation. In their 2018 tour, Kohli-Shastri-led India had come close but lost the Test series to hosts South Africa 2-1.