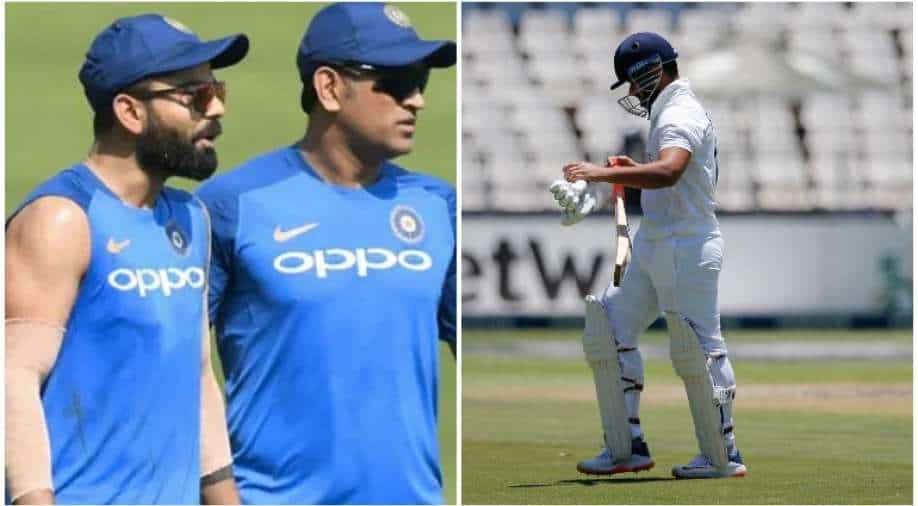 'MSD once told me...' - Kohli while talking about Pant's shot selection Photograph:( AFP )

Virat Kohli opened up on Rishabh Pant's approach and recalled an important piece of advice received from his former captain MS Dhoni.

Kohli, on Monday (January 10), opened up on India's possible team combination, on his century drought, growth of the Test team under his captaincy, transition phase, Rishabh Pant's shot selection, etc. In the second and penultimate Test, at The Wanderers, Johannesburg, Pant's shot selection in India's second essay was heavily criticised as the left-hander went for a big shot, off Kagiso Rabada, and threw his scalp when the visitors' lead wasn't even close to the 200-run mark.

ALSO READ | Virat Kohli responds to criticism over lean patch: 'Don't need to prove anything to anyone'

Hence, Kohli opened up on Pant's approach and recalled an important piece of advice received from his former captain MS Dhoni.

Kohli said in the presser, "We did have a conversation with Rishabh Pant during practice and when a batter plays a bad shot, he would know more than anybody if he has played the right shot according to the situation and as long as an individual accepts that, he will make progress. We have all made mistakes in our career in important situations where we have got out, due to pressure or whatever the situation was."

Moreover, the Indian Test captain then mentioned Dhoni's advice and said, "I remember MS Dhoni once telling me that there should be a 6-7 months gap between your two mistakes. That is how you will progress in your international career. That became a part of my system. So reflecting on your mistakes is important and I know Rishabh does that and he will learn from his mistakes."

India will look to win the third and final Test and also register their first-ever series win on South African soil. After winning the series opener in Centurion, Kohli-less India lost the penultimate contest as the series is interestingly poised at 1-1 heading into the deciding match.