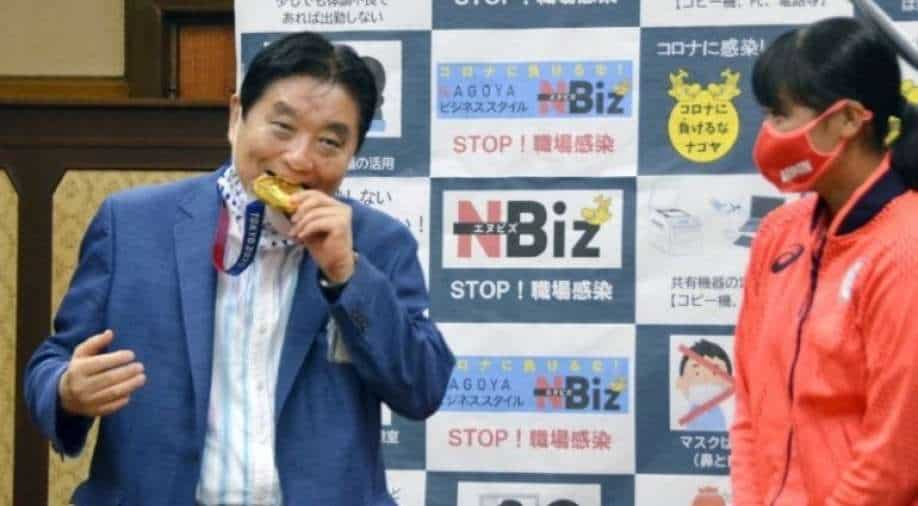 The mayor received a lot of criticism on social media for his action. They lashed at him for disregarding coronavirus etiquette and was accused of showing a lack of respect for her feat.

The organisers of the Tokyo Olympics 2020 on Thursday have assured a member of Japan's gold medal-winning softball team to get her Gold medal replaced after the mayor of her hometown chomped down on the original.

Last week, Takashi Kawamura, mayor of central Japan's city of Nagoya, was a part of event to celebrate Miu Goto's achievement at the Tokyo 2020 Games where he put her gold medal between the teeth.

The mayor received a lot of criticism on social media for his action. They lashed at him for disregarding coronavirus etiquette and was accused of showing a lack of respect for her feat.

"With support from the International Olympic Committee and in line with her own intention, Ms Goto's medal is now set to be exchanged for a new one," Tokyo 2020 organisers said, adding that the IOC will bear the cost of the exchange.

The Tokyo Games came to a close after successfully hosting 339 events. The Olympics were held behind closed doors due to surge in coronavirus cases in Japan.

Despite 430 COVID-19 cases in the Olympics village, the Games continued without any hindrance.

While most of the public remained opposed to the Games leading up to its opening, there have not been more recent polls since the start of the Olympics to compare public sentiment.

Voter support, however, for the government slid to 34%, the lowest since Prime Minister Suga took office last September.

The IOC has touted the high TV viewership of the Games to show the Japanese public's support of the event. The IOC has said that 113.5 million Japanese watched some coverage of the Games as of Aug. 1.

There were intermittent protests at the Games, including outside the National Stadium during the opening ceremony, but none large enough to significantly disrupt any of the events.