To officiate in T20 World Cup and Ashes is my next target: Nitin Menon to WION 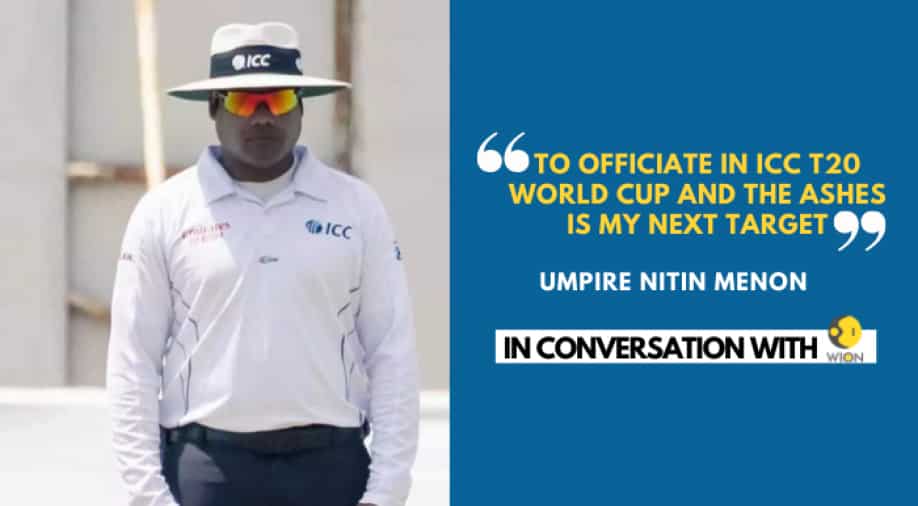 In an interview with WION, Nitin Menon talked about his experience of umpiring in all four Test matches between India and England, his next targets in the world of umpiring, living inside bio-secure bubbles, DRS and the much-talked-about umpire’s call and much more.

Nitin Menon, who was inducted in the ICC Elite Panel of Umpires in June 2020, has set the standards high with top-notch officiating in the recently concluded four-Test series between India and England. Menon and his fellow umpires’ performances were lauded by many including the likes of Sunil Gavaskar and Graeme Swann as India went on to seal the series 3-1.

In an interview with WION, Nitin Menon talked about his experience of umpiring in all four Test matches between India and England, his next targets in the world of umpiring, living inside bio-secure bubbles, DRS and the much-talked-about umpire’s call and much more.

Menon's performance as an umpire was applauded by fans and pundits. As he continues to set fresh benchmarks as umpire, Menon hardly got his decisions wrong. For the 37-year-old, praises come as recognition for the good work but he is focusing on getting better with many series and tournaments coming thick and fast in a hectic cricketing schedule.

“You feel happy when your performances are praised by so many people including some of the legends of the game. But it is important to not get too ahead of yourself. My career is just starting as an ICC Elite Umpire and I just want to focus on getting better. My colleague Anil Chaudhary, Virender Sharma and C Shamshuddin did a great job as well. As a group, we enjoyed our performances and are really proud,” Nitin Menon, who made his international umpiring debut in a T20I between India and England in January 2017, told WION.

Menon and his fellow umpires in the series were spot on with their decisions. While it is natural to get a few wrong calls in challenging conditions, Menon feels Indian umpires are more apt in officiating in both spin and seaming conditions.

“We (Indian umpires) get plenty of experience in Ranji Trophy or other domestic tournaments. Over the years, we know how a certain pitch or ball will behave in particular conditions. Both spinning conditions and seaming conditions possess a different set of challenges and it is the same for umpires like players, we have to adapt to conditions quickly,” Menon said.

The Decision Review System (DRS) became the talk of the town after a few decisions were concluded on the basis of 'umpire’s call’. Fans and experts are often quick to pass judgement on some of the decisions on the field, Menon remains unfazed by the criticism around the technology.

“With umpire's call, we are sure that the decision wasn't wrong. There will always be marginal calls during the match. Our final call will always be based on what the third umpire is telling us in that case,” Menon said.

Menon had the best seats in the house as Joe Root started the series with a double century followed by masterclasses by Rishabh Pant, Rohit Sharma, Ravichandran Ashwin, Washington Sundar among others.

ALSO READ: WTC Final: How do India and New Zealand fare at Ageas Bowl in Southampton? A look at key stats

When asked whether umpires discuss a particular knock or spell during the match or in-between the breaks, Menon said: “We remain so focus on our job that sometimes we don't even know which batsmen are batting at what score. I agree that umpires are at the best spot to enjoy a certain knock or spell but we are here to do our job and can't let ourselves get distracted. Even during the drinks break or other breaks, we don't talk about cricket as that is the only time, we get to relax a bit during a match.”

When asked what his next target would be after such a splendid show in the India versus England Test series Menon named the upcoming ICC T20 World Cup in India and the Ashes which is scheduled to be hosted by Australia.

“Definitely the ICC T20 World Cup and hopefully, the upcoming Ashes as well. These are the two immediate targets for me. The Ashes is like a dream and it would be great if I could officiate in the series,” Menon said.

From living inside bio-bubbles to regular testing for COVID-19, umpires also have to follow strict bio-secure bubbles protocols as the players.

"It is challenging with all the restrictions and staying away from your family. But we are among the privileged ones to be able to do our jobs. The last year was gloomy with so many things happening with the pandemic. But thankfully, we are able to get some live cricket now and can't complain much. Hopefully, things will be back to normal very soon," Menon concluded.