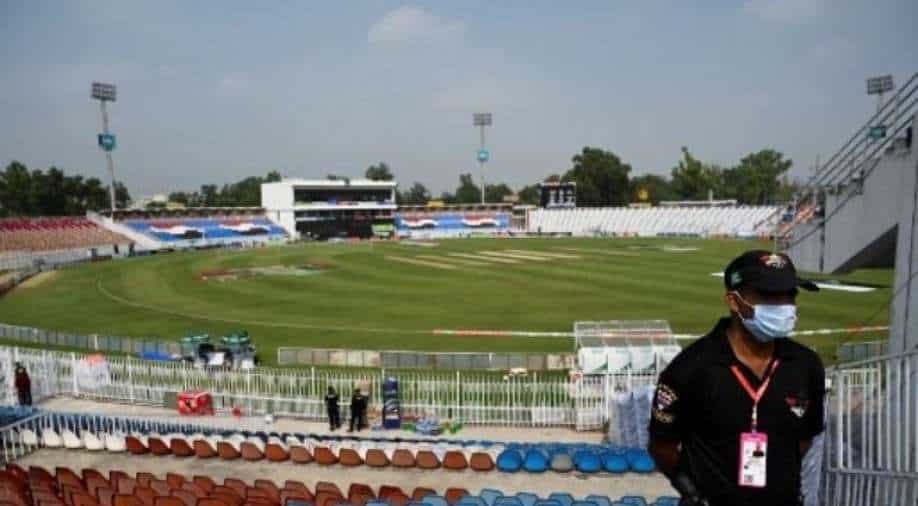 A policeman stands guard on the empty stands of the Rawalpindi Cricket Stadium in Rawalpindi on September 17, 2021, after New Zealand postponed a series of one-day international (ODI) cricket matches against Pakistan over security concerns. Photograph:( AFP )

Soon after the Pakistan Cricket Board (PCB) and some cricketers expressed their frustration and disappointment over the cancellation, the country has now started to shift the blame

After the New Zealand cricket team abandoned the Pakistan series citing security concerns, the officials have been trying to defend their so-called security system as England also called off their men's and women's tours.

Soon after the Pakistan Cricket Board (PCB) and some cricketers expressed their frustration and disappointment over the cancellation, the country has now started to shift the blame to India.

In a press conference on Wednesday (September 22), Pakistan's Information Minister Fawad Chaudhry claimed that the threat to New Zealand's cricket team came in an email that "originated in India".

It is interesting to note that New Zealand had refused to divulge the details of the security threat and they didn't even update the travel arrangements for the departing squad. Now, New Zealand's cricket squad arrived home on Wednesday (September 22).

Here are some of the claims made by Pakistan:

1) Pakistan Information Minister Fawad Chaudhry said the "threat had come via an email".

2) He said that the "possible user of this e-mail ID (Identity document) is an Indian, Om Parkash Mishra, from Mumbai, Maharashtra."

3) Fawad Chaudhry also said that the device that was used to send a threat to the New Zealand team "belonged to India".

4) He said that the email was "generated from India through a VPN showing the location of Singapore."

5) Chaudhry further added that the West Indies team, due to arrive in December, had also been sent a threat that he said was fake.

Shunned by all after a deadly 2009 attack on the Sri Lanka team bus in Lahore, Pakistan have been trying to woo back top international teams.