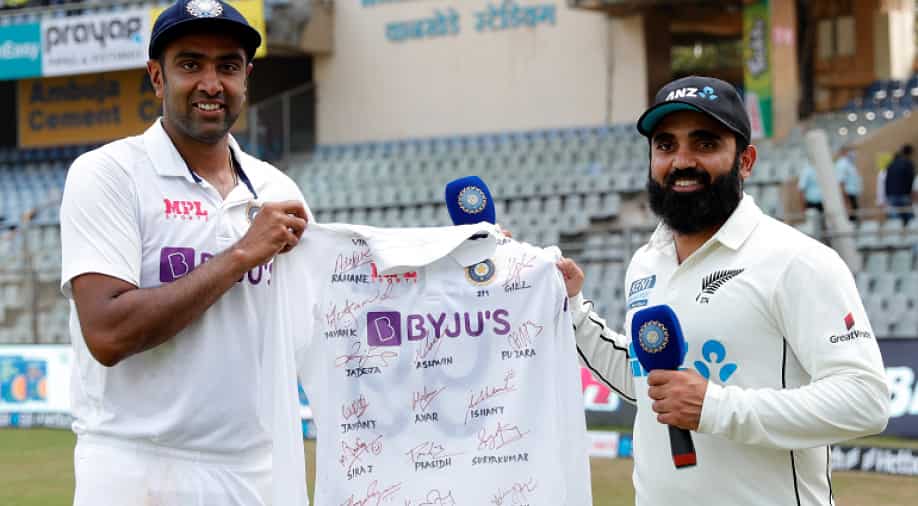 Ajaz Patel was honoured by the Indian players after his historic ten-wicket haul. Photograph:( Twitter )

Indian players came up with a brilliant gesture to honour Ajaz Patel after his heroics in the Mumbai Test between India and New Zealand that concluded on Monday (December 06).

Indian players came up with a brilliant gesture to honour New Zealand spinner Ajaz Patel after his historic ten-wicket haul in the second Test between the two sides at the Wankhede Stadium in Mumbai. The Indian players presented Patel with a signed jersey after the conclusion of the Test match on Monday (November 06) to celebrate his bowling heroics in the game.

Ajaz finished with exceptional figures of 10/119 in his 47.5 overs in the first innings and followed it up with a four-wicket haul in the second innings. The left-arm spinner registered the best figures by any bowler against India in a Test match with a total of 14 wickets under his belt.

BCCI shared pictures of Indian spinner R Ashwin presenting an Indian jersey signed by every member of the Indian squad to Patel for his historic ten-wicket haul in the game. Ashwin also interviewed the Kiwi spinner, who has etched his name in history with his bowling heroics at the Wankhede.

You just cannot miss this 🗣️ 🎥@ashwinravi99 & @AjazP in one frame

Stay tuned for this folks

With his 14 wickets in the Mumbai Test, Patel broke England legend Ian Botham's 41-year-old record by registering the best match bowling figures against India in a Test. Patel surpassed Botham, who had finished with 1/106 in the Mumbai Test in 1980.

Ajaz Patel was the star for New Zealand with a historic ten-wicket haul in India's first innings but his efforts went in vain as the hosts registered a massive win by 372 runs to clinch the two-match series 1-0. The batters let down New Zealand as they were bundled out for 62 and 167 in the two innings respectively. Tasked to chase down 540 runs in the second innings, the Kiwis could only manage 167 runs on the board as they lost by a huge margin.