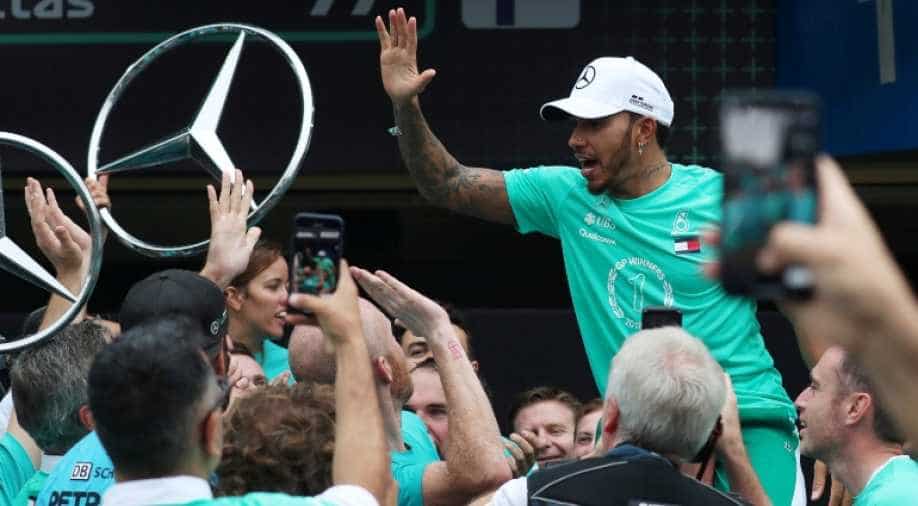 Lewis Hamilton has told his Mercedes Formula One teammates they are all 'legends' after completing a fifth successive constructor and driver title double in Brazil on Sunday and pledged to help make them the sport's most successful team ever.

Hamilton, who took his fifth title in Mexico last month, will address staff at Brackley and Brixworth on Tuesday in what will be a thank you, communal celebration and rallying cry rolled into one.

"I have to try and find the right words," the 33-year-old said on Sunday, a bashful comment for a man whose achievements -- 10 wins and 10 poles so far this season -- speak for themselves.

The Briton will have no trouble in expressing himself, having already done so in an emotionally-charged garage debrief at Interlagos.

"It's an incredible honour to work with all of you," he told assembled mechanics, engineers and bosses after winning the penultimate race of the season. "Seeing you guys after the race, seeing that energy that you guys all had, that happiness can fill a lifetime.

"I really want you to just remember that moment and hold on to it because that's what's going to power us to many more championships. Never let that energy drop... I tell you, that propels me.

"This past six years has been epic and iconic. We are now legends. Just remember that. When you go home, when you look in the mirror, when you wake up, say 'I'm a legend'. You've got to say that to yourself: 'I'm a legend'.

Sunday was Hamilton's 72nd career win, leaving him 19 short of Michael Schumacher's all-time record. The Briton has averaged 10 a season for the last four years and won 50 of 99 races in the V6 turbo hybrid era that started in 2014.

"You've got to say that Lewis this year has just made the difference for us," technical director James Allison told Sky Sports television.

"He keeps putting it on pole, whenever its wet he’s always at the front. In the races we can make mistakes and he’ll recover it by doing something unlikely on the track that no-one sees coming.

"And he spends a whole year not making mistakes. He’s just the consummate racing driver."

Only Ferrari had previously racked up five successive championship doubles and their milestone of six constructors' titles in a row between 1999 and 2004 remains the sport's outright record.

That is the next target on the radar and it will be back to business soon enough.

"The risk is that you become complacent with winning and I think this team has overcome this obstacle," declared team boss Toto Wolff on Sunday night. "We’ve set ourselves objectives that motivated us.

"And the job is going to get more difficult every year. We are setting the benchmark at the moment and our competition will get more energized and motivated by us.

"All points start at zero next year. We will have forgotten about the five and will fight hard to be in contention for the sixth. Whether we achieve it or not we will see next year."

Hamilton's enduring motivation has been questioned in the past but, on Sunday's evidence, that is not a concern.

"I want to continue trying to elevate Mercedes to making them the most successful brand of all time," he said.

"I've never experienced the height of what I'm feeling and experienced here. And I know when I get to the factory the energy is going to be higher than I've ever felt so I've got to get to sleep.

"I might not be able to hold these emotions in."