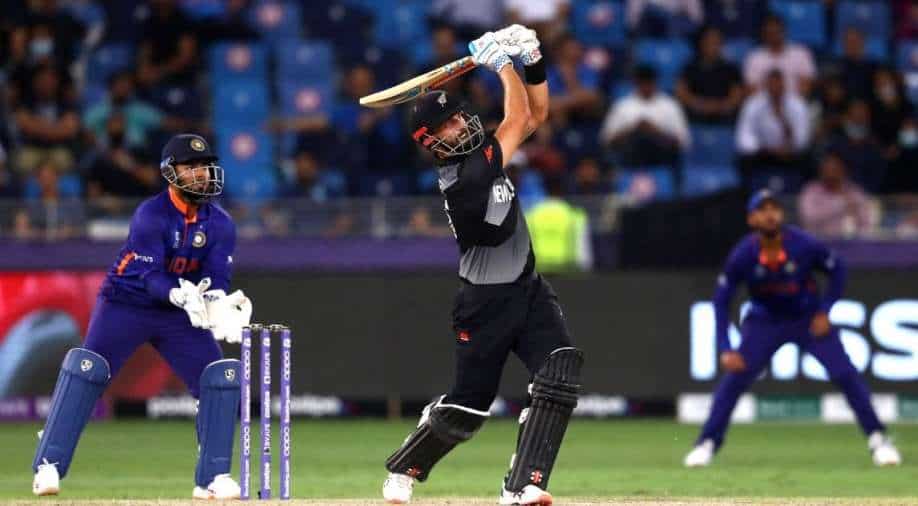 Daryl Mitchell top-scored with 49 as New Zealand hammered India to register their first win of the Super 12 stage. Pace bowler Trent Boult and leg-spinner Ish Sodhi shared five wickets between them to restrict India to 110 for seven after the Kiwis decided to bowl first in Dubai.

Mitchell and skipper Kane Williamson, 33 not out, put on 72 runs for the second wicket as New Zealand romped home in 14.3 overs and hand India their second loss of the tournament in as many games.

Daryl Mitchell is gone after a brilliant knock of 49.

Virat Kohli lost the toss and they were put in to bat, India's rejigged top-order wilted in no time and the 2007 champions crawled to 110-7 in 20 overs in the Super 12 match. Boult (3-20) and Sodhi (2-17) starred in New Zealand's disciplined bowling display.

India's batting order was thrashed as they slumped to 48-4 in the 11th over. Boult dismissed Kishan for four, and nearly bounced out Rohit with the next ball too but Adam Milne floored the catch at long leg.

Sodhi dealt a body blow in the 11th over when he induced a skier from Kohli which Boult pouched at long-on to send groans across the stands populated mostly by India fans.

Hardik Pandya made 23 and Ravindra Jadeja contributed 26 not out as India laboured past the 100-mark after what looked like a catching practice in the deep for the New Zealand fielders.

During the post-match presentation, Kohli said, "We obviously didn't have much to play with the ball. We were just not brave enough in our body language when we entered the field and NZ had better intensity, body language. Every time we took a chance, we lost a wicket. It's most often a result of hesitation of whether you should go for a shot or not."

For New Zealand, Mitchell and Williamson remained not out on 33 as New Zealand triumphed with 33 balls to spare to bounce back from the defeat by Pakistan in their tournament opener.