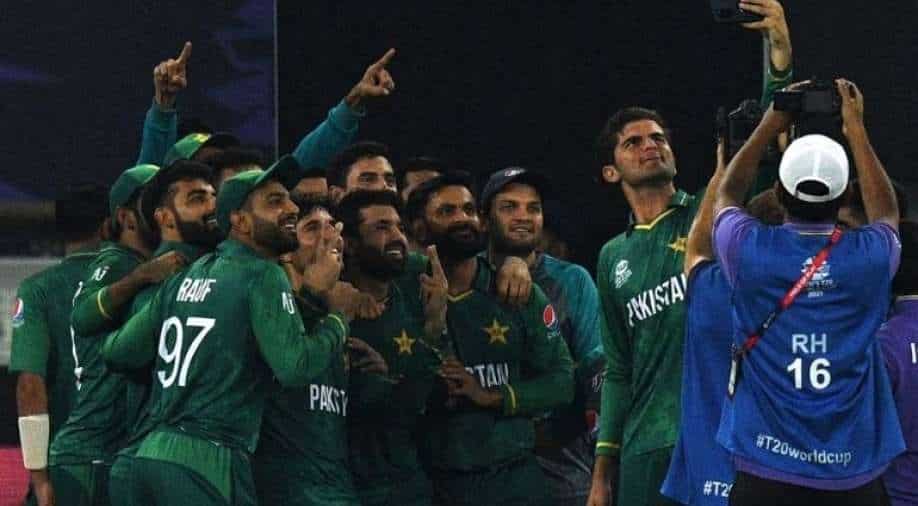 The Babar Azam-led Pakistan cricket team is unbeaten in the T20 World Cup 2021 edition. To keep them motivated, Saqlain Mushtaq has adopted a unique method. Find out:

The Pakistan cricket team have been on a roll in the T20 World Cup 2021 edition, being held in the UAE. The Babar Azam-led team stunned India by ten wickets in their tournament-opener and followed it up with another impressive performance versus New Zealand, emerging on top of the Black Caps by 5 wickets.

Hence, the Men in Green look certain to top the Pool B, at this stage, and enter the semi-finals. While they still have three games to go in the Super 12 round, things can change for the worse in no time. Hence, in order to keep them motivated and focused at all times, their interim head coach and former spinner Saqlain Mushtaq has come up with a unique way to keep the Pakistan team's spirits high at all times.

Mushtaq, as per Pakistani journalist Saj Sadiq, has decided to plant the flags of Pakistan onto the ground where Babar & Co. are training.

Ahead of Pakistan's next match in the T20 WC, Saj tweeted saying, "Saqlain Mushtaq has made sure that #Pakistan flags are planted into the ground during practice sessions. It’s to motivate the players, to give the players a sense of feeling and a reminder that they have the honour of representing their country on a world stage."

Saqlain Mushtaq has made sure that #Pakistan flags are planted into the ground during practice sessions. It’s to motivate the players, to give the players a sense of feeling and a reminder that they have the honour of representing their country on a world stage #T20WorldCup pic.twitter.com/zSlG9vrRQY

ALSO READ | 'Who are they to off air me': Shoaib Akhtar slams Pakistan TV channel after spat with anchor on live show

Recently, Mushtaq said in a virtual press conference, “If India makes it to the final with us, it would be a great thing because I feel -- and this is not because we became big-headed after beating them -- but because they are a strong team, everyone considers them a favourite.

"If India comes in the final, then it would be very good for the ICC, fans around the world and for world cricket -- everyone will enjoy it. They are our neighbouring country and playing one more match would only improve our relations," he added.

Pakistan play Afghanistan in their third game in the Super 12 round, on Friday evening (October 29) at the Dubai International Cricket Stadium, Dubai. The Men in Green will be eager to keep their winning streak intact.