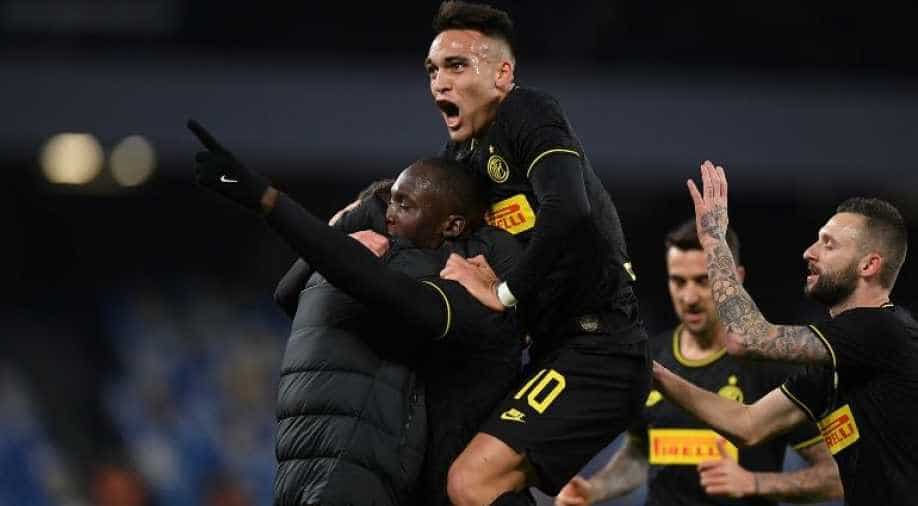 Inter lead the standings on goal difference from Juventus, who beat Cagliari 4-0 earlier on Monday, with both teams on 45 points.

Inter Milan forward Romelu Lukaku scored twice, the first from a run which started inside his own half, to lead his side to an entertaining 3-1 win at Napoli which kept them top of Serie A on Monday.

Lautaro Martinez was also on target as Inter claimed their first away win against Napoli since 1997.

Inter lead the standings on goal difference from Juventus, who beat Cagliari 4-0 earlier on Monday, with both teams on 45 points. The head-to-head record will be used once the two sides have met twice.

Napoli, on the other hand, suffered their second defeat in three games since Gennaro Gattuso replaced Carlo Ancelotti as coach and stayed eighth with 24 points despite showing flashes of their old style.

"This win is worth a lot," said Inter coach Antonio Conte. "It's never easy to win at Napoli for anyone. We faced the match with great personality and this will give us more self-confidence and belief. We need to carry on like this."

Napoli also had chances before Lukaku put Inter ahead after 13 minutes. The Belgian, who now has 14 league goals this term, intercepted a pass just inside his own half, charged forward and scored with a shot which went in off the post.

His second in the 33rd minute came with a helping hand from Napoli goalkeeper Alex Meret, who seemed to have Lukaku's shot covered but allowed it to slip through his legs into the net.

It was tough luck on Meret who had previously produced two good saves to keep Inter down to one goal.

Napoli kept plugging away and Arkadiusz Milik tapped in Jose Callejon's low cross to pull one back in the 39th minute. The Pole should then have equalised when he had a free header just before halftime but directed his effort well wide of the goal.

Napoli continued to press after the break but, despite some flowing moves, they failed to find the final pass and Inter went further ahead just after the hour.

Matias Vecino floated over a cross from the right which Napoli defender Kostas Manolas managed to intercept but, in doing so, laid the ball off for Martinez to score his ninth league goal of the season.

"We made decisive mistakes in all three of the goals we conceded," said Gattuso. "However, we showed we can play football and we need to continue doing that. We have to improve in various areas of the pitch."