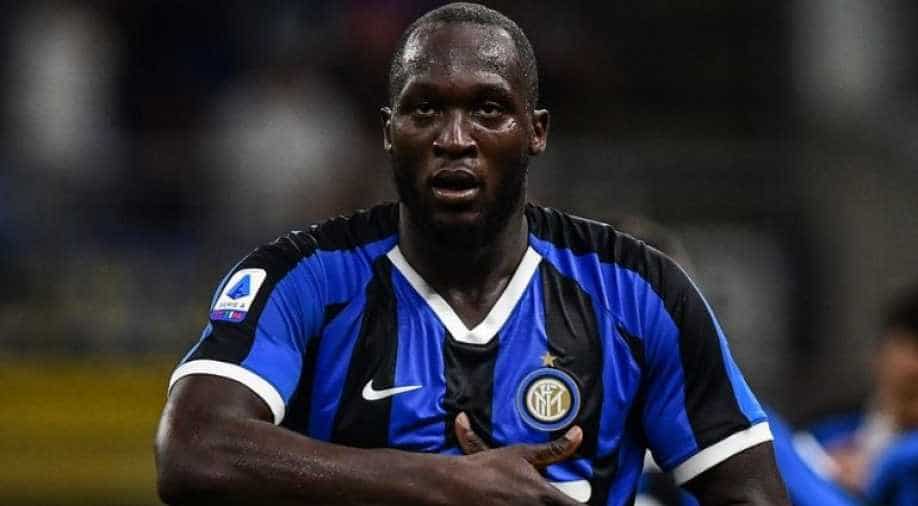 Racist chanting has dogged Italian stadia in recent years, with Italy striker Moise Kean also the victim of similar abuse — alongside teammate Blaise Matuidi — at Cagliari after he scored a goal there for his former team Juventus last April

Italian football was involved in another racism storm on Sunday as Romelu Lukaku was targeted by monkey chants before putting Inter Milan top of Serie A with the winning penalty in their 2-1 triumph at Cagliari.

Lukaku — a 65 million euros ($73 million) summer signing from Manchester United — was preparing to take the spot-kick in the 71st minute in Sardinia when the racist chants came from the crowd that continued for several seconds.

The 26-year-old Belgian international angrily looked towards the stands before confidently converting his second goal in as many games, which came after Lautaro Martinez's 28th-minute opener for the Antonio Conte's side and Joao Pedro's leveller for the hosts four minutes after the break.

Lukaku was quickly surrounded by his teammates as Inter won their second from two league matches to sit ahead of champions Juventus, who also are on maximum points following their thrilling 4-3 win over Napoli on Saturday.

Racist chanting has dogged Italian stadia in recent years, with Italy striker Moise Kean also the victim of similar abuse — alongside teammate Blaise Matuidi — at Cagliari after he scored a goal there for his former team Juventus last April.

Kalidou Koulibaly was showered with monkey chants last season by Lukaku's new fans at the San Siro, while several other black players have been targeted.

"I can speak however in general: I think we need to improve in Italy, respect everyone.

"When I was working abroad, the fans would cheer on their own team, not spend their entire time insulting the opponent. I was fine here, noone insulted me."

Torino are right alongside Inter and local rivals Juve after shocking Atalanta 3-2, while Lazio missed the chance to keep the pace with that trio after drawing an eventful Rome derby 1-1.

Aleksandar Kolarov put Roma ahead in the 17th minute against the run of play with a well-taken penalty, but Luis Alberto grabbed the equaliser just before the hour mark to leave Paulo Fonseca without a win as new Roma boss.

Lazio missed several chances to seal a second win from their two opening games, hitting the woodwork four times with Roma rattling the frame of the goal twice. The hosts' biggest regret was Manuel Lazzari's 92nd-minute strike being ruled out for offside.

"There's a bit of bitterness. We had 21 shots on goal, hit the woodwork four times and a goal ruled out," said Lazio coach Simone Inzaghi.

"We had so many chances and you have to win games like that."

"We offered an extraordinary show for the public, and a great thrill for me as a coach, at my first Rome derby," said Fonseca.

The derby took place amid heightened security after the murder of former Lazio ultras chiefs Fabrizio Piscitelli, nicknamed "Diabolik", who was shot dead in the capital last month.

Piscitelli was for almost 30 years the boss of Lazio's hardcore Irriducibili ("Die Hards") fan group, which is notorious for its far-right politics.

Lazio fans unfurled a banner in his honour before the match with "Rest in peace Fabrizio".

Torino are also on maximum points after their comeback win at Atalanta, who qualified for this season's Champions League by finishing third last season.

Kevin Bonifazi had put Torino ahead after 24 minutes before Duvan Zapata's double either side of the break for Atalanta.

But Alex Berenguer got Torino back level on 57 minutes with Armando Izzo nodding in the winner on 66 minutes.

Fiorentina fell to their second straight defeat 2-1 at Genoa, as did Sampdoria who were hammered 4-1 at Sassuolo thanks to a Domenico Berardi hat-trick scored in 14 first-half minutes.