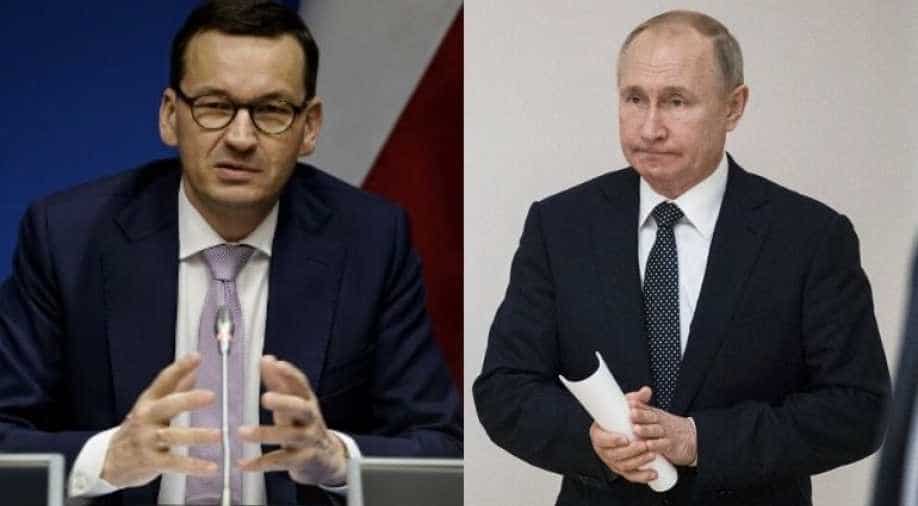 As the row escalated, the Polish foreign ministry summoned the Russian ambassador to complain about Putin’s comments.

Polish Prime Minister Mateusz Morawiecki hit out at Russian President Vladimir Putin for "deliberately lying" about Poland being responsible for the outbreak of World War-II.

"President Putin has lied about Poland on numerous occasions, and he has always done it deliberately," Morawiecki said in a statement, adding, "this usually happens when Russian authorities feel international pressure related to their activities. In recent weeks Russia has suffered several significant defeats."

Putin in a speech recently had blamed Poland for the outbreak of World War-II and also accused it of anti-semitism in pre-war Poland. Putin said the Polish ambassador in Warsaw at the time had put up a Nazi salute in Warsaw and had agreed to sends Jews to Africa.

As the row escalated, the Polish foreign ministry summoned the Russian ambassador to complain about Putin’s comments.

Morawiecki said European Union sanctions on Russia in the aftermath of the Crimea conquest and the recent Russian doping scandal were responsible for Putin taking a shot at his country.

"I consider President Putin's words as an attempt to cover up these problems. The Russian leader is well aware that his accusations have nothing to do with reality –- and that in Poland there are no monuments of Hitler or Stalin," Morawiecki said.

"Such monuments stood here only when they were erected by the aggressors and perpetrators –- the Third Reich and Soviet Russia," he added.

World War-II broke out in on September 1, 1939 after Hitler's Nazi Germany attacked Poland after which the Soviets attacked Poland on September 17 and occupied a part of the country carving Poland into two parts. Germany and the former Soviet Union had secret clause under the Molotov-Ribbentrop pact to split Poland.