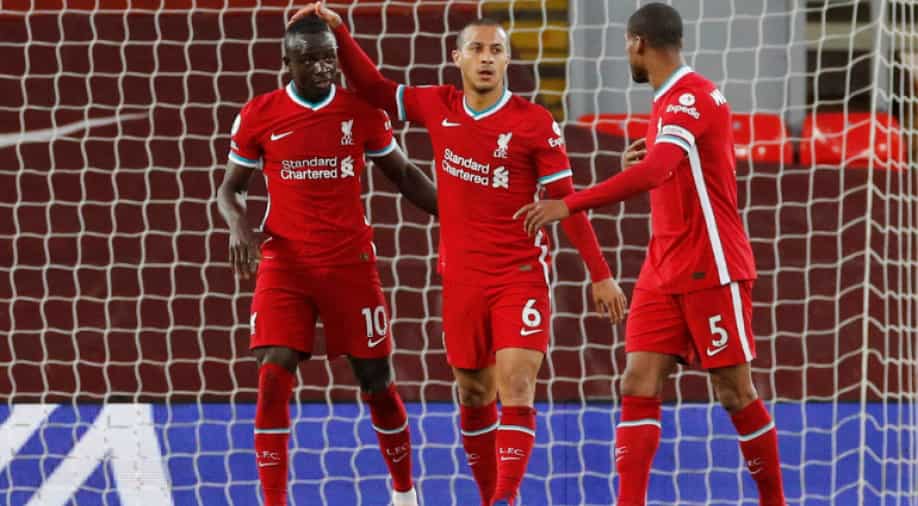 Sadio Mane's first-half header and a late effort by Thiago earned Liverpool an unconvincing 2-0 win at home to Southampton on Saturday to keep Juergen Klopp's side in the hunt for a top-four finish in the Premier League.

Liverpool was far from their best, and keeper Alisson saved them on several occasions. But the win moved them into the sixth spot with 57 points from 34 games, six points behind fourth-placed Leicester City with a game in hand.

Mane got on the end of Mohamed Salah's flighted pass into the area in the 31st minute, seconds after Southampton's Che Adams had been denied an opener for the visitors.

The three points looked far from safe until Thiago buried a low shot into the corner in the 90th minute -- his first goal since joining Bayern Munich.

Southampton remains in 16th place and, while they are not mathematically safe from relegation, they look like hanging onto their top-flight status.

"Top four is not impossible but it's difficult. We will give it a try and see where we get to," he said.

Manchester City's earlier defeat by Chelsea meant that, technically, Liverpool are still champions. But they continue to look nothing like the marauding machine that took them to the title last season in such a dominant fashion.

Southampton keeper Fraser Forster was kept busy with saves from Diogo Jota and Salah early on but Liverpool looked uneasy whenever Southampton attacked and were lucky not to fall behind.

Nathan Teller found himself in acres of space down the right flank and surged forward before crossing low for Adams who looked certain to score before Alisson smothered his shot.

Liverpool made the most of that let-off a minute later when Salah hoisted the ball into the box and Mane headed in.

Tella wasted a chance to equalize before halftime when he headed straight at Alisson, while Adams had the ball in the net only for his effort to be disallowed for a foul.

Jota forced a sharp save by Forster after halftime while at the other end Alisson was fortunate when he cleared the ball straight to Adams, whose shot allowed the keeper to recover.

Mane had a goal disallowed but Thiago settled the issue when he threaded a shot into the corner.

"It is an amazing feeling to score but the most important thing is the three points. We keep fighting for a small miracle," Thiago said of Liverpool's top-four hopes.

"The window is open so we try to go through the window."