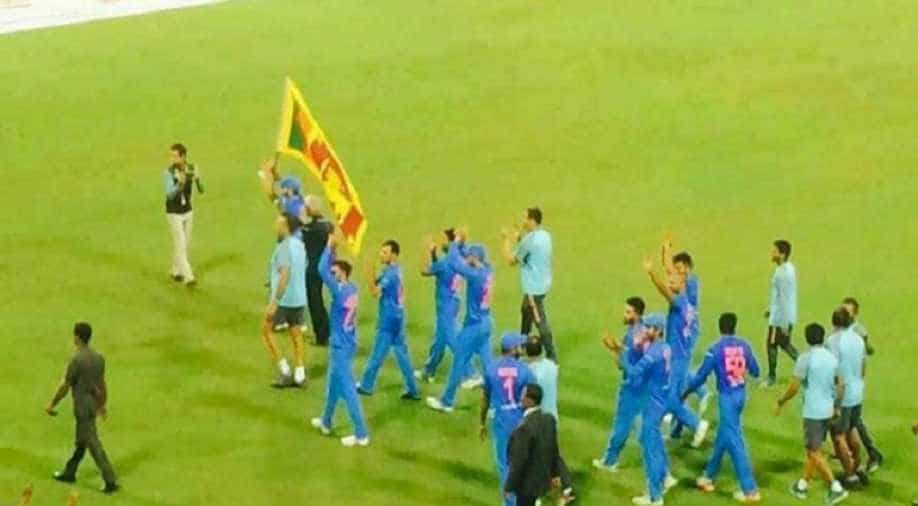 The Indian team clinched victory from the jaws of Bangladeshi team in the finals with Dinesh Karthik scoring 29 runs of just 8 balls. Photograph:( Twitter )

However, it was captain Rohit Sharma's humble act post-victory which also made headlines and made him earn more respect from the local fans.

After claiming an almost impossible victory,  skipper Rohit, instead of waving Indian tri-color, asked for the Lankan flag from a fan and took a lap of honour in order to acknowledge the local fans' support.

It's All about RESPECT
Gentleman's Game
Happy & pleased to see these pics ????????#NidahasTrophy #INDvsBAN pic.twitter.com/3Log7cdQJO

This gesture not only displayed strong bond and friendship between both the nations over the years but once again proved that cricket is a gentleman's game.

Apart from the flag, the Indian team followed its skipper and took lap of honour with Lanka's ardent fan Percy Abeysekera, which surely made Rohit hugely popular in the Island nation.

what was the best sight of this whole match was Rohit sharma, captain of Indian team, holding Sri lanka’s national flag after winning nidhas trophy which was organised to celebrate 70 years of Sri lanka’s independence. #INDvBAN #NidahasTrophy2018 #DineshKarthik pic.twitter.com/TnpUVGjYGc

Yesterday we witnessed something that Cricket has never seen before!
The Captain ROHIT SHARMA did a lap of honour with Sri Lanka's Flag after winning the tournament
Rohit Sharma - The Best Captain ❤#INDvBAN pic.twitter.com/HJyOLtKK3r

The tournament titled 'Nidahas' means Independence and it was organised to celebrate the 70th year of Sri Lanka's Independence.

The Indian team clinched victory from the jaws of Bangladeshi team in the finals with Dinesh Karthik scoring 29 runs of just 8 balls.