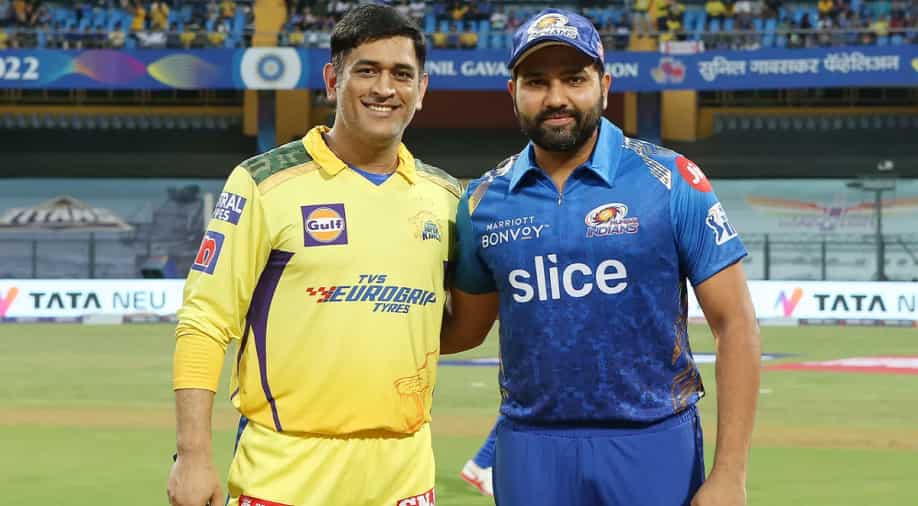 MS Dhoni and Rohit Sharma were among the least valuable players in IPL 2022. | Photo - IPL | Photograph:( Others )

As per a report, Rohit Sharma, MS Dhoni and Virat were among the least valuable players in the recently-concluded IPL 2022 owing to their poor show with the bat.

The 15th edition of the Indian Premier League (IPL) saw a number of youngsters once again rise to prominence with their impactful performances for their teams throughout the tournament. While the likes of Umran Malik and Mohsin Khan turned out to be the finds of the tournament, several other young guns like Rajat Patidar, Jitesh Sharma and Ayush Badoni also impressed with their talent and skills. Some of the youngsters turned out to be the most valuable players of the season considering their low buying price and brilliant show on the field.

While the youngsters rose to the occasion yet again, a number of superstars failed to deliver in the recently-concluded season. It was a forgetful season for the 'Big 3' - MS Dhoni, Virat Kohli and Rohit Sharma. While Dhoni still managed to dazzle with the bat in patches despite being past his prime at 40, a lot was expected from Kohli and Rohit, who struggled to deliver throughout the season.

As per an analysis by the Times of India, Rohit, Dhoni and Kohli were among the least value money buys in IPL 2022. In a report, TOI analysed players' data and statistics based on their performance and the price they were bought for by their respective teams in the recently-concluded IPL 2022. The players were given points per million INR spent on them and were rated accordingly.

Punjab Kings' wicket-keeper batter Jitesh Sharma turned out to be the most valuable player with 241.8 points. He was bought for a sum of just Rs 20 lakh (INR 2 million) and scored 234 runs for his franchise at a strike rate of 163.63. Lucknow Super Giants pacer Mohsin Khan finished at the second spot for his 14 wickets in 9 games at a stunning economy of 5.96. Mohsin was bought by LSG for Rs 20 lakh (INR 2 million)

On the other hand, Kohli, who struggled to get going with the willow throughout the season, was placed at the 157th spot in the overall rankings having managed only 2.6 points per million. The RCB star scored 341 runs in 16 matches and failed to power his team to the final. Dhoni finished at the 161st spot with 232 runs in 14 games while Rohit managed to earn only 1 point per million and got the 178th spot.

Most valuable players in IPL 2022 based on their price:

Mumbai Indians had spent a whoopping Rs 16 crore (INR 160 million) to retain Rohit as their first-choice player ahead of the season while Kohli and Dhoni were retained for a sum of Rs 15 crore (INR 150 million) and Rs 12 crore (INR 120 million) respectively.

Both Mumbai Indians and Chennai Super Kings, two of the most successfull teams in IPL history, endured a horrific campaign this season as they failed to make it to the playoffs. CSK and MI finished at the bottom of the table while RCB managed to reach the playoffs but failed to go all the way.