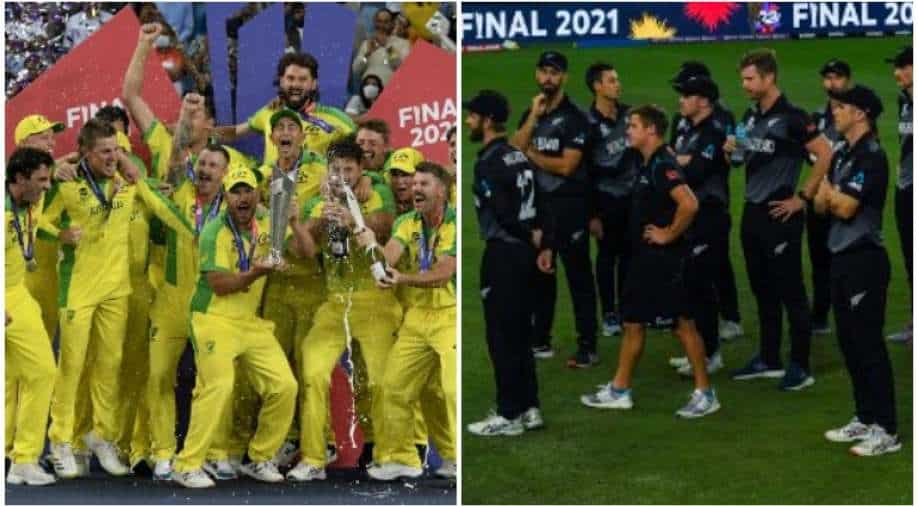 As the seventh edition of the T20 WC ended, which was held in the UAE for the first time, here's much money did the winners Australia and runners-up New Zealand take home post the showpiece event:

Australia and New Zealand locked horns with each other in the T20 World Cup 2021's final, on Sunday evening (November 14) at the Dubai International Cricket Stadium, Dubai. While both sides were fighting for their maiden title in the T20 WC, Aaron Finch-led Australia won easily by eight wickets, with seven balls to spare, to claim their eighth ICC title overall.

Opting to bowl first in Dubai, the Men in Yellow restricted the Black Caps to 172-4 riding on Kane Williamson's 85 off 48 balls. Nonetheless, the Aussies didn't give any chance to the Kiwis during their run-chase as David Warner's 53 and Mitchell Marsh's 77 not out propelled them to a comfortable eight-wicket victory.

As the seventh edition of the T20 WC ended, which was held in the UAE for the first time, here's much money did the winners and runners-up take home post the showpiece event:

The ICC, a week prior to the competition, had announced the prize money the teams would be taking home. Thus, champions Australia have taken home a cheque of Rs 12 crore (approx) while runners-up Black Caps settled for Rs 6 crore (approx).

"The winners of the 2021 ICC Men's T20 World Cup will be awarded prize money of $1.6 million while the runners-up will take home $800,000," the ICC had announced in its statement in October.

In the post-match presentation, Finch stated, "This is huge. To be the first Australian team to be able to do it. So proud. We knew our backs were against the wall. We had some great individual performances, some great team performances. Can't believe people wrote him off saying he was done (Warner). That's when he plays his best cricket. Was almost like poking the bear. The player of the tournament for me (Zampa). Mitch Marsh - what a way to start his innings today. Wade coming into this game with an injury cloud but got a job done. Stoinis did the business."

Australia weren't deemed as favourites in the run-up to the tournament, losing as many as five bilateral T20Is ahead of the T20 WC. However, they defeated the likes of South Africa, Pakistan, New Zealand, West Indies, Sri Lanka and Bangladesh to win the coveted title. Their only defeat came against Eoin Morgan-led England.