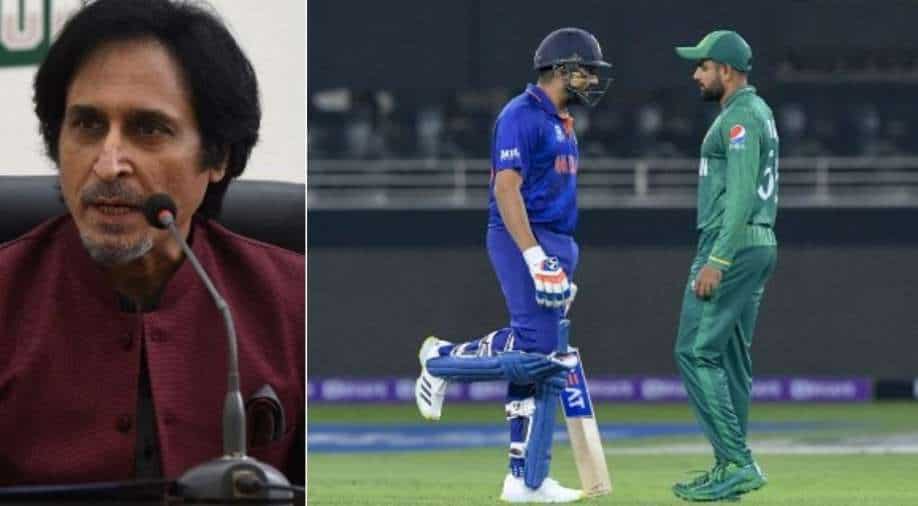 Shaheen Shah Afridi dismissed Rohit Sharma with a fast delivery that swung in and trapped the batter lbw for a first-ball duck. Photograph:( AFP )

Babar Azam and Mohammad Rizwan's half-centuries helped Pakistan to reach the set target but it was left-arm quick Shaheen Shah Afridi, who set up the victory with figures of 3-31

In the recently concluded ICC Men's T20 World Cup 2021, Pakistan defeated India in the Super 12 stage, thanks to their skipper Babar Azam and Mohammad Rizwan's half-centuries. Pakistan beat India by 10 wickets to register their first-ever win over their arch-rivals at a Twenty20 World Cup.

However, the win was set up by Pakistan's left-arm quick Shaheen Shah Afridi as with figures of 3-31 he helped the team to restrict Indian at 151-7. The modest target was chased down by the Men in Green with 13 balls to spare.

Shaheen dismissed Rohit Sharma and KL Rahul to put Indian on the back foot during the high-octane match. The pacer struck the first blow with a fast delivery that swung in to trap Sharma lbw for a first-ball duck. The bowler got Rahul with a delivery that came in sharply to take the batsman's thigh pad and rattle the stumps.

Pakistan's cricket board chief Ramiz Raja explained how he plotted Rohit's wicket even before the tournament was started. In a podcast interview with the BBC, Raja revealed that he and the Pakistan skipper interacted about how to take the wicket of India's star opener.

He said, "Babar Azam was here with the Chief Selector before leaving for the World Cup and I asked him what are your plans against India." Babar then replied: "I have plans and we employ Cricviz and they do the matchups."

The PCB chief then said, "I understand but India will also be using Cricviz and then they will have a ploy set up against you. So, that becomes nothing for us."

Explaining it to Babar and telling him how they should target Rohit's wicket, Ramiz said, "I can tell you how to get rid of Rohit Sharma right now and Babar was intrigued."

He added, "I said get Shaheen Afridi bowling at 100mph, get a man at short-leg and a 45. Just bowl that inswinging yorker at 100mph and do not give him a single and keep him on strike. You will get him out."