Rafael Nadal madness: The joy and struggles of being his fan 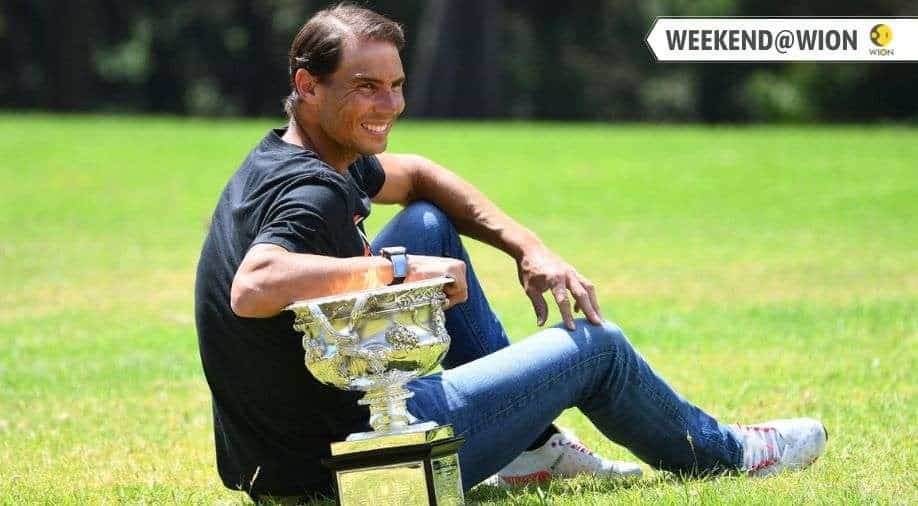 Nothing comes easy when you are Rafael Nadal. His fans are also used to seeing him sweat hard, change (tight) t-shirts during lengthy matches, grunt loudly before winning big. A similar script unfolded for the tennis superstar when he faced Russia's Daniil Medvedev in this year's Aus Open final at Melbourne Park.

Growing up, sports dominated a major chunk of my daily life. Either it was starting the day by flipping the newspaper backwards, to get the sports updates, or fighting for the remote -- with the elder sibling -- to watch sporting events from across the globe (not denying, cricket remained top priority).

Nonetheless, my father's inclination towards tennis brought me closer to the game. Soon, I found myself gazing at the TV sets for hours, particularly, when marquee players faced each other on the court. The four Grand Slam events became a major part of my calendar year as well.

While Roger Federer won titles left, right and centre and made tennis look like the easiest game of all -- it is anything but easy -- a slightly younger Rafael Nadal emerged out of Spain to challenge the Swiss maestro.

Nadal dominated every opposition on clay court, especially winning the French Open without breaking any sweat on many occasions. Slowly and steadily, he gained a good hold on hard courts (US Open and Australian Open). His aggression, palpable energy, fitness, etc. won me over. His training and playing style proved that he hardly ever cared for the word 'impossible'.

As years progressed, Nadal and Federer were joined by Novak Djokovic as the Big Three continue to rule the roost in tennis to date. Meanwhile, I managed to sustain my interest in sports by donning the journalist's hat in the specific beat.

While tennis took a backseat for me, I continued to keep a tab on Nadal's journey. Often, his sudden first-round exits left me bewildered whereas his injury concerns made me restless. Nonetheless, I slowly made peace with the fact that it isn't easy being Nadal and, probably, tougher remaining his fan.

The Spaniard, however, kept himself relevant in the field and competed hard, with major titles still flocking his way albeit at regular intervals.

In 2018, Federer attained his 20th Grand Slam trophy when he defended his title in the Australian Open. In the year 2020, Nadal equalled the Swiss maestro when he clinched the French Open. In the following year, Djokovic joined the two with equal number of titles (20) with a win in Wimbledon 2021.

Thus, Nadal headed into the 2022 Australian Open as a very strong contender to become the first male tennis player to get to 21 major titles. Of course, World No. 1 Novak Djokovic's deportation back to his home country (Serbia) before the Aus Open -- due to Covid-19 vaccination row -- helped Nadal's cause. On the other hand, Federer wasn't taking part in the showpiece event. Thus, it seemed as if the stars were aligned to see him recreate his unimaginable magic on-court.

However, nothing comes easy when you are Rafael Nadal. His fans are also used to seeing him sweat hard, change (tight) t-shirts during lengthy matches, grunt loudly before winning big. A similar script unfolded for the tennis superstar when he faced Russia's Daniil Medvedev in this year's Aus Open final at Melbourne Park on January 30.

Luckily, I was glued to the TV set on that Sunday afternoon -- enjoying a peaceful week-off -- to watch the summit clash. Being on-off helped me immensely as the mental pressure was set to grow manifold.

Down but never out...

In a flash, Nadal lost the opening two sets. The aces were far and few in between. Medvedev was breaking his serve as it seemed all lost. Having grown up watching his relentless energy, never-say-never attitude until the last point, power-hitting and turning into an aggressor during tougher tides, I still had hopes on Nadal. However, they were falling apart with each point lost.

A big player keeps fighting on as he, or she, knows even a small moment can shift the momentum in their favour. Nadal has time and again done that. While I feared the pattern would catch up with him, the veteran proved that one who believes in himself, or herself, doesn't fear the impossible. All of a sudden, he earned a few good points whereas Medvedev lost the plot amid lack of crowd support; bringing the Spanish player back in contention.

The 35-year-old won the third set and came from behind to win the final two. Eventually, Nadal won 2-6, 6-7 (5-7), 6-4, 6-4, 7-5 to stun the sporting fraternity. While the social media fanclubs will only keep a count on the Big Three's titles, Nadal remains unfazed despite becoming the first man to reach the magical 21-Grand Slam title mark.

Nadal and Nadal-fan: A strange match made in heaven!

Nadal remains content with teaching his fans to do the cliched -- keep working hard and let the process take care of the results. His appetite for success, fighting spirit, ability to bounce back, self-belief and competitive spirit is worth a chapter in itself.

At 35, Nadal continues to give me goosebumps. He makes me come face-to-face with an unwanted side of mine (where I get irritated when the going gets tough) before signing off by doing the impossible on the court. Surely, the joy and struggles of being his supporter will continue for as long as he continues to challenge the impossible.