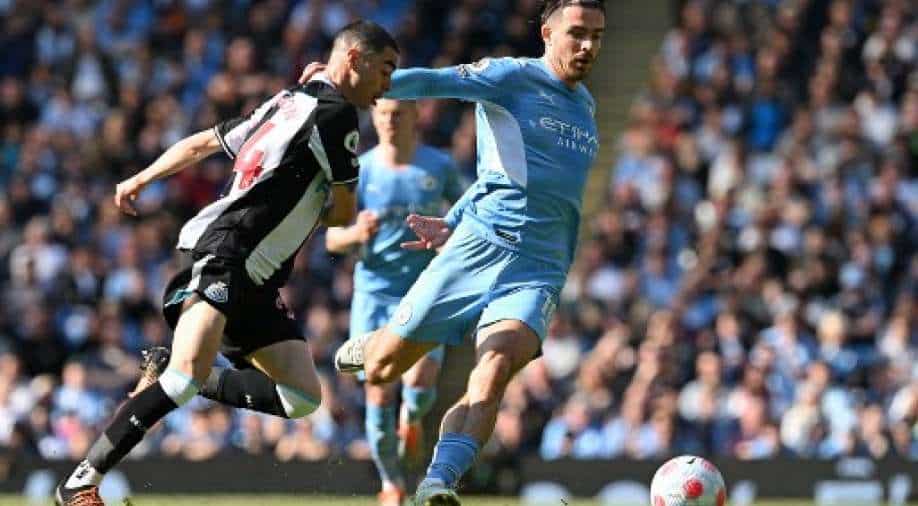 Manchester City extended their lead at the top of the Premier League table Photograph:( AFP )

Raheem Sterling scored twice for the hosts with Aymeric Laporte, Rodri and Phil Foden also on target as they shrugged off the bitter disappointment of their Champions League semi-final defeat by Real Madrid.

Manchester City reclaimed top spot in the Premier League with a 5-0 drubbing of Newcastle United that allowed the reigning champions to open up a three-point lead over Liverpool at the Etihad Stadium on Sunday.

Raheem Sterling scored twice for the hosts with Aymeric Laporte, Rodri and Phil Foden also on target as they shrugged off the bitter disappointment of their Champions League semi-final defeat by Real Madrid.

Sterling eased any early jitters with a header and Laporte`s tap-in gave City full control before the interval.

Rodri headed City`s third from a corner after the break and Foden swept in his side`s fourth before Sterling struck again in stoppage time as City took emphatic advantage of Liverpool`s 1-1 draw with Tottenham Hotspur the previous day.

Newcastle`s Chris Wood spurned a great chance to give his side an early lead but the visitors were no match for City who took an important step towards a fourth title in five seasons.

City have 86 points to Liverpool`s 83 with both sides having three games remaining and City now have a superior goal difference. Pep Guardiola`s side need seven points from their last three games to be guaranteed the title.

Liverpool face Aston Villa on Tuesday with City up against Wolverhampton Wanderers a day later.

"The defeat to Real Madrid was so, so big but football is like this. You have to switch on the focus for the Premier League because it is even more difficult," Rodri said.

City needed a response after their last-gasp heartbreak in Madrid and Newcastle proved ideal opposition in the sunshine.

Things might have got edgy if Wood had found the net with an early header from Allan Saint-Maximin`s inviting cross but he sent a tame effort straight at City goalkeeper Ederson.

City took the lead in the 19th minute when Ilkay Gundogan clipped a superb ball to the back post for Joao Cancelo to head back across goal for Sterling to nod in.

Wood had an effort ruled out for offside soon after and City moved further ahead after 38 minutes when Newcastle goalkeeper Martin Dubravka spilled the ball and Laporte converted.

Rodri lost his marker to head in Kevin De Bruyne`s corner after 61 minutes and Foden got in on the act when Oleksandr Zinchenko`s shot arrived at his feet and he diverted it in.

City saved the best to last with a flowing move allowing an unmarked Sterling to fire home.

Newcastle manager Eddie Howe has now lost all 10 of his Premier League meetings against Guardiola.