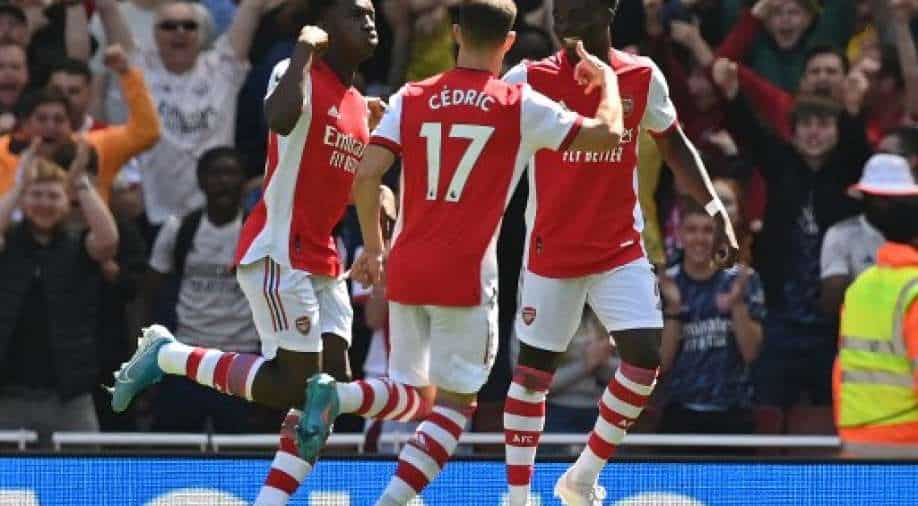 Arsenal, on 66 points with three games remaining, opened up a four-point gap on north London rivals Tottenham Hotspur in fifth ahead of Thursday`s derby and moved to within a point of third-placed Chelsea.

Leeds United suffered a huge setback in their battle for Premier League survival as a 2-1 loss at Arsenal on Sunday plunged them into the relegation zone and the hosts took another step towards securing a top-four finish.

An early quickfire double from former Leeds loanee Eddie Nketiah put Arsenal in firm control before the visitors were reduced to 10 midway through the first half when Luke Ayling was sent off for a two-footed challenge on Gabriel Martinelli.

Leeds did not have an attempt at goal until Diego Llorente`s header beat goalkeeper Aaron Ramsdale in the 66th minute but Arsenal weathered a nervy finish to close out their fourth successive victory and solidify their hold on fourth place.

Arsenal, on 66 points with three games remaining, opened up a four-point gap on north London rivals Tottenham Hotspur in fifth ahead of Thursday`s derby and moved to within a point of third-placed Chelsea.

A second straight defeat for Leeds left them in 18th place with 34 points, behind Burnley on goal difference, after Everton`s 2-1 victory at Leicester City lifted the Merseyside club out of the bottom three.

"We are in the relegation zone but we have to fight for our lives," Leeds manager Jesse Marsch said.

"Our backs are against the wall... We have to regroup and figure out what we can do.

"When I came here two months ago, I knew this was not going to be easy. The group has stayed strong.

Our second-half performance highlights the character of the people we have here."

Nketiah fired Arsenal ahead after five minutes when visiting goalkeeper Illan Meslier dwelled on a routine back pass, allowing the forward to nip in and poke the ball home from inside the six-yard box.

Five minutes later, Martinelli wriggled past three Leeds defenders and played a neat cut-back to the unmarked Nketiah for the 22-year-old to tap in for his ninth goal of the season in all competitions.

Arsenal were hunting for a third, with Meslier saving efforts from Martinelli and Martin Odegaard, before Leeds captain Ayling was booked for a reckless challenge on Martinelli and saw his yellow card upgraded to red following a VAR review.

Leeds struck with their first effort of the game when Llorente`s header sparked them into life as they looked to salvage a point, and in a tense finish Ramsdale saved from Rodrigo in stoppage time.

Arsenal hung on for victory before the short trip to Tottenham Hotspur Stadium, where a win would end their five-year wait for Champions League football.

"We have earned the right to play that game in that context," manager Mikel Arteta said. "We are going to prepare for the game as best as we can."