Pak vs Aus: Commentator Kasprowicz corrects himself in a jiffy after calling Lahore pitch flat - WATCH 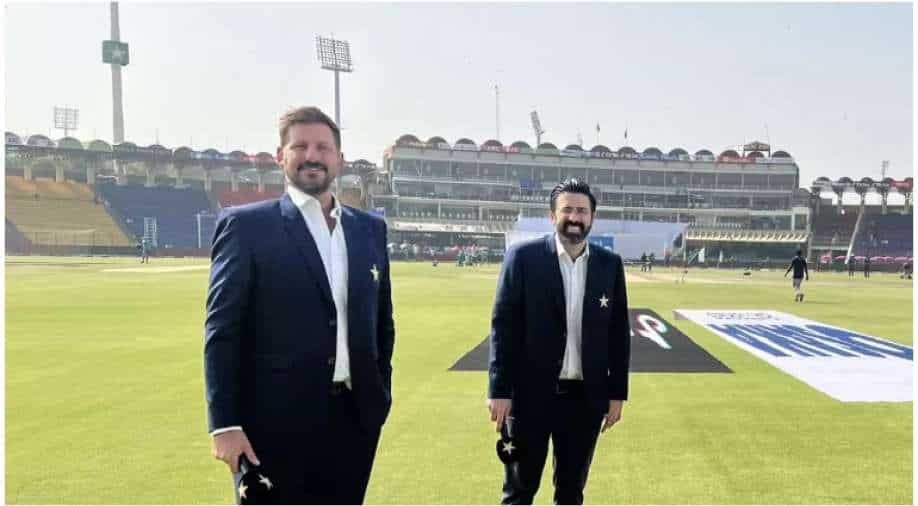 Pakistan vs Australia: While the series decider's result will be out in a few days' time, former Aussie pacer-turned-commentator Michael Kasprowicz has given his verdict for the Lahore pitch, at least if his first opinion is taken into consideration. Here's the video of how he corrected himself:

The Pakistan-Australia Test series has made heads turn in the cricketing fraternity. While the first Test was a run-fest that saw only 14 wickets falling during the course of the day, the second and penultimate Test had a riveting finish on day five but it still didn't produce an even battle between bat and ball.

The third and final Test is currently underway at the iconic Gadaffi Stadium, Lahore. While the series decider's result will be out in a few days' time, former Aussie pacer-turned-commentator Michael Kasprowicz has given his verdict for the Lahore pitch, at least if his first opinion is taken into consideration.

While on air during Day Two's play, the former speedster said, "It's important, isn't it. We talk about the spinners, the variations, the speed is certainly one of those things. But also for the fast bowlers, and certainly Mitchell Starc's speeds have been very consistent here at 140. But I think, the key also, on these flat wickets -- sorry, on these good batting strips what we are seeing here, beautiful batting strips..."

Thus, Kasprowicz realised his folly and corrected himself in a jiffy and later called the Lahore surface a 'beautiful batting strip'. Here's the video of the incident:

Have a listen to Michael Kasprowicz go into full panic mode once he realizes he’s called the pitches “flat” despite the PCB giving a directive to the commentators not to mention how flat they are… #PAKvAUS https://t.co/8Li0CsDRz3 pic.twitter.com/SUXn9N2q9v

According to some media reports, the Pakistan Cricket Board's (PCB) chairman Ramiz Raja has asked the commentary panel to not discuss the nature of the pitch during the series. Thus, Kasprowicz corrected himself and reframed his words.

Talking about the third Test in Lahore, Pat Cummins-led Australia posted 391 in the first innings. In reply, Babar Azam's Pakistan are going strong and crossed the 220-run mark with the loss of three wickets.

Who will seal the series? Only time will tell...