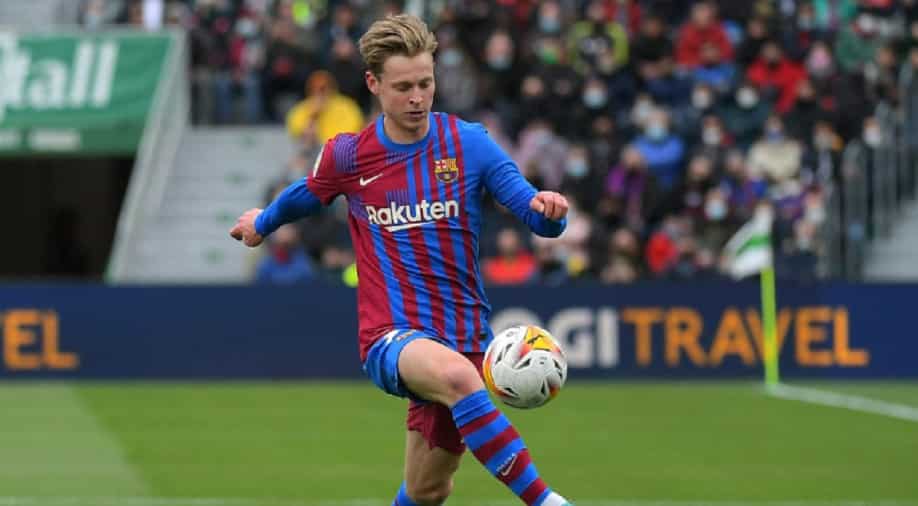 FC Barcelona president Joan Laporta has claimed Frenkie De Jong is not for sale amid reports that Manchester United have already agreed a deal with the club for the Dutch midfielder.

Manchester United are yet to make their first signing in the ongoing summer transfer window but the club are already plotting moves to strengthen their squad ahead of the new season. With the arrival of Dutch manager Eri Ten Hag as the club's new head coach, there is a newfound optimism at United despite their usual slow moves in the transfer market. Ten Hag has already identified his key targets ahead of the new season with Barcelona midfielder Frenkie de Jong on the top of his priority list.

United's midfield is in desperate need of a revamp after the departures of the likes of Paul Pogba, Juan Mata, Jesse Lingard and Nemanja Matic this summer. Ten Hag has identified midfield as an area of priority and reportedly wants the club to sort out De Jong's transfer at the earliest before moving on to other targets.

Earlier this week, there were reports claiming United have already agreed a deal with Barcelona for the transfer of De Jong, who played under Ten Hag at Ajax before securing his move to the La Liga giants in 2019. However, now Barcelona president Joan Laporta has claimed De Jong is not for sale and that the club would like to keep him at the Camp Nou.

Laporta claimed Barcelona has no intentions of selling De Jong, who is regarded as one of the best midfielders in the world at present. His comments are contrary to the reports that United are close to finalising a deal for the Dutch midfielder.

"We have no intention of selling him and he wants to stay. Manchester United is not the only one who wants him," Laporta told Spanish newspaper Mundo Deportivo. However, Laporta revealed Barcelona have an issue with De Jong's current salary and the player will have to take a pay cut if he wants to stay.

“I'm going to do everything to keep Frenkie, but there’s also a salary issue and that would have to be adjusted,” Laporta said.

Also Read: 'Time for me to leave': Cristiano Ronaldo tells Manchester United he wants to leave this summer - Report

If Laporta's comments have any truth, it can come as a huge blow for United in their pursuit of the Dutch midfielder. Ten Hag has been trying to persuade De Jong to join him at United for several weeks now and the two clubs were believed to be in advance negotiations. However, the Barcelona president's comments has once again put the deal in doubt.