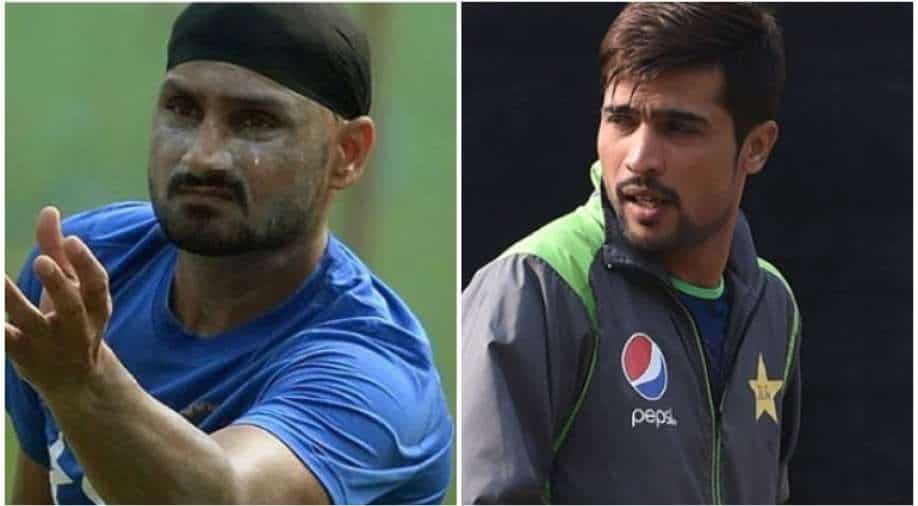 Following the India-Pakistan T20 World Cup 2021 clash, Harbhajan Singh and Mohammed Amir got involved in a banter where the former taunted Amir over spot-fixing scandal. Now, Bhajji has released a video slamming Amir -

India and Pakistan locked horns with each other for the first time, across formats, in over two years when they met in match 4 of the Super 12 round in the T20 World Cup, in the UAE, on Sunday (October 24). While Virat Kohli-led Team India were expected to romp past Pakistan and maintain their winning streak versus the Men in Green in World Cups (both ODIs and T20Is), they lost to Babar Azam & Co. by ten wickets at Dubai.

While Kohli & Co. gracefully accepted the defeat and will now be desperate to get off the mark in the tournament with a win over New Zealand, things got out of control between Indo-Pak players on social media platform Twitter. Recently, Mohammed Amir tried to poke fun at Harbhajan Singh, however, things went too far between the two cricketers.

While Amir tried to be cheeky with Bhajji, the veteran Indian cricketer soon reminded him of his infamous spot-fixing saga as the two's war of words caught the attention of many on Twitter. Now, Harbhajan has slammed Amir and hit back at him, in a video released on his Youtube channel.

"India-Pakistan is a high pressure game and a lot depends on the result. On that day, the Pakistani side played very well. They beat us in all departments. We gratefully accepted it. The talk is over now." He added, "Before that me and Shoaib Akhtar, we both work for media, I support my team, he supports his team which is fair enough. Banter between me and him has been going on for many years. In that another person came in between, Mohammad Amir. I want to know who he is. Because me and Shoaib have a very old friendship. We know each other for many years. We have done shows together too."

"I do not want to get into the mud as I will dirty myself only and Amir does not have the status or level that I should talk to him. The more I talk to him I will lower myself. He is a disgrace. He put a black spot on world cricket. The person who sold cricket, sold his country, and sold his integrity. He was looking to earn money at Lords by bowling an intentional no-ball. I should not have reacted to him only," added Harbhajan. It will be interesting to see if Amir also replies to Harbhajan. The cricket lovers would, meanwhile, hope that the war of words between the two end soon.

Speaking about the respective campaigns of Pakistan and India in the T20 WC, the Babar Azam-led Men in Green have registered two wins on the trot whereas India are gearing up for their face-off versus New Zealand, on October 31 at the Dubai International Cricket Stadium, Dubai, with an aim to bounce back after their Pakistan drubbing.