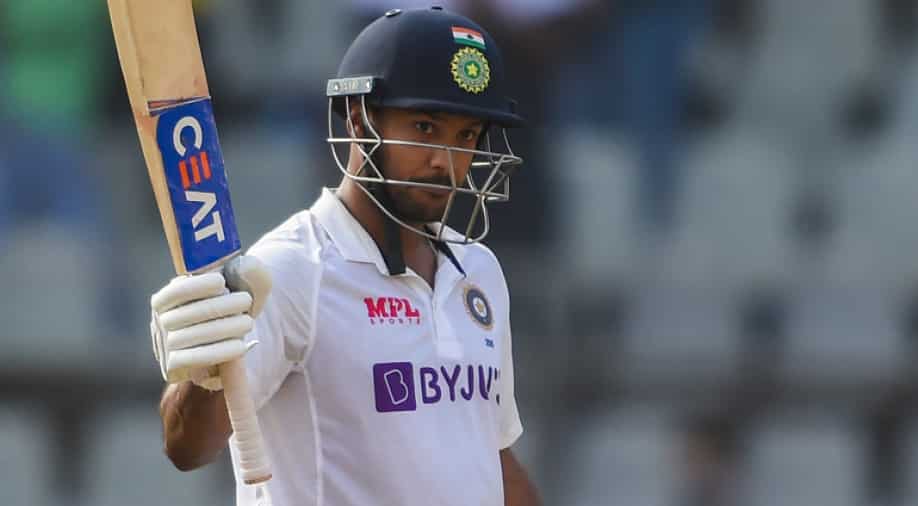 Indian opener Mayank Agarwal slammed a brilliant century on Day 1 of the ongoing first Test between India and New Zealand at the Wankhede Stadium in Mumbai.

Former India batting coach Sanjay Bangar has heaped praise on Mayank Agarwal after his brilliant century on the opening day of the ongoing second Test between India and New Zealand at the Wankhede Stadium in Mumbai. Bangar said Agarwal is the most attacking Indian batter against spin since Virender Sehwag when it comes to the longest format of the game.

Agarwal looked in a great rhythm right from the start of India's first innings in the second Test on Friday as he notched up an unbeaten 120-run-knock to help the hosts post 221/4 at stumps. Agarwal combined with his opening partner Shubman Gill (44) to get India off to a great start with an 80-run stand for the first wicket before India lost three wickets in quick succession.

He then combined with Shreyas Iyer (18) to add another 60 runs for the fourth wicket and tackled Azaj Patel really well. The Kiwi spinner was on fire as he picked up all the four wickets that India lost on the first day of the series-opener. Bangar lauded the Indian opener for his terrific strokeplay against spin and called him one of the best Indian batters against spin in Tests since Sehwag.

"In my opinion, Mayank Agarwal is the most attacking batter against spin I have seen since Virender Sehwag for India in Test cricket. Everyone says that he steps out and plays the aerial shots well and targets the straighter boundaries," Bangar said on Star Sports.

"But there was one special thing seen in this knock and it was also because of the extra bounce, that he played so many shots off the back foot. He played very good pull shots when the ball was slightly back of length," he added.

Agarwal was the top scorer for India on Day 1 as he notched up an unbeaten 120 off 246 balls laced with 14 fours and four sixes. He posted an unbeaten stand of 61 runs for the fourth wicket with Wriddhiman Saha (25), who remained not out on 25 at the end of Day 1's play as India looked in control.

India will be looking to post a big total on the board in their first innings when they resume their batting on Day 2 of the Mumbai Test on Friday.