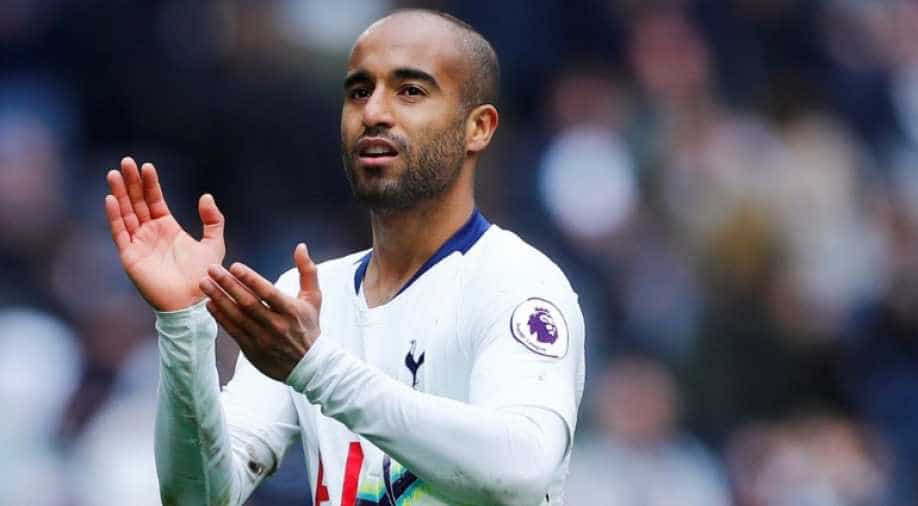 Spurs were without the injured Harry Kane and Dele Alli but Lucas's treble, which included two goals in the final few minutes, and an early Victor Wanyama goal, were just reward for a dominant display against the league's bottom side

Tottenham Hotspur's Brazil forward Lucas Moura struck a superb hat-trick in a 4-0 win over relegated Huddersfield Town on Saturday to bolster the home side's hopes of a top-four finish in the Premier League.

Spurs were without the injured Harry Kane and Dele Alli but Lucas's treble, which included two goals in the final few minutes, and an early Victor Wanyama goal, were just reward for a dominant display against the league's bottom side.

Lucas, who celebrated with his one-year-old son Miguel on the pitch at the end, said, "I practise all the time and I'm so happy today because I did very well, good passes, good finishes and if we play like this as a team we can win a lot of things."

The win in the early game took Spurs up to third place, a point ahead of Chelsea and four points clear of fifth-placed fellow London rivals Arsenal, who have a game in hand.

Tottenham made seven changes from the side that beat Manchester City 1-0 at home in the Champions League in midweek, with an eye on the quarter-final second leg on Wednesday.

"It's so important because seven changes I think builds up confidence in the squad and confidence in the team," Spurs manager Mauricio Pochettino told reporters. "It's going to be a tough race to the end (to finish in the top four)".

Wanyama put Spurs ahead after 24 minutes with a fine individual goal after dribbling around goalkeeper Ben Hamer and tucking the ball into an empty net from a Ben Davies pass.

Three minutes later the hosts scored again thanks to a fierce right-foot drive by Lucas that flew underneath Hamer after the excellent Moussa Sissoko set him up on the break.

Spurs' Fernando Llorente hit the bar after halftime and was unlucky not to get on the scoresheet after a lively display. Huddersfield's Juninho Bacuna had a late free-kick tipped on to the bar before Christian Eriksen hit the post on the counter.

Six minutes later Lucas controlled Eriksen's cross and fired into the bottom corner past the helpless Hamer before rounding off the win by smashing into the top corner in stoppage time after being fed by substitute Son Heung-min.

"Now we have a good battle in Manchester; we need from now to recover for this game and prepare very well," added Lucas. "It will be so hard there but if we play like we did today we can go there and get a good result and we can qualify."