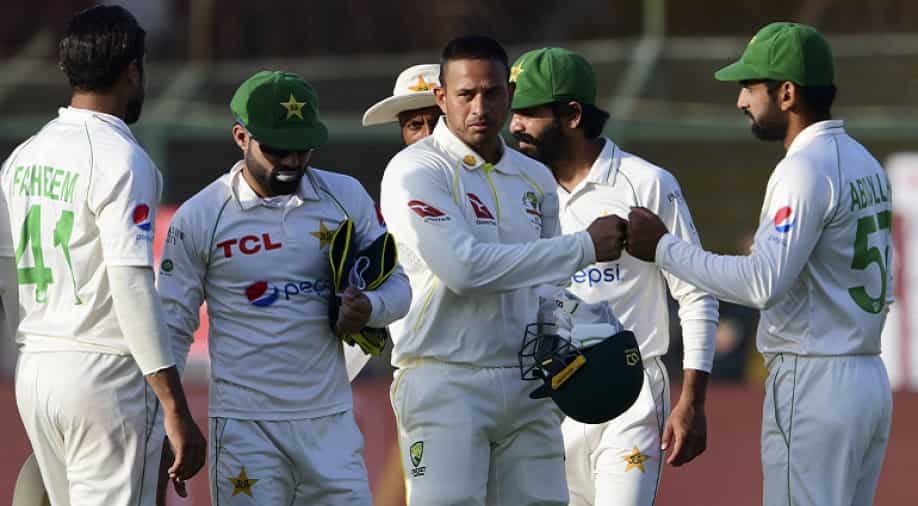 Former Pakistan captain Waqar Younis has slammed Babar Azam & Co. for their 'ridiculous' tactics in the ongoing second Test against Australia at the National Stadium in Karachi. Australia have dominated Pakistan so far in the second Test as the visitors have already crossed the 400-run mark in their first innings after a brilliant century from Usman Khawaja.

The Pakistan-born Australian opener played a sublime knock of 160 runs off 369 deliveries laced with 15 fours and a solitary six to set the stage for a big total for his side. Khawaja was well complimented by the likes of Steve Smith (72) and Alex Carey, who also notched up a half-century is currently unbeaten out in the middle.

As Pakistan bowlers struggled to take wickets on Day and Day 2 of the second Test in Karachi, legendary pacer Younis questioned the hosts' tactics. While speaking on commentary, Younis said it felt like Pakistan were playing for a draw right from Day 1 of the second Test and that their tactics have been 'ridiculous'.

Also Read: Would they have done it against India? Brathwaite slams England for 'disrespectful' tactics vs West Indies

"The tactics I'm seeing at the moment is like we're looking for a draw on the first day. It's ridiculous," Younis said on commentary as he slammed Pakistan.

Khawaja and other Aussie batters dominated the proceedings on Day 1 of the Karachi Test as the left-hander's hundred guided the visitors to 251/3 at stumps. Khawaja continued from where he had left on Day 3 and added a 54-run stand for the fourth wicket with Nathan Lyon (38) before adding another 43 runs for the fifth wicket with Travis Head (23).

Also Read: 'Are you in jail?': Indian fans troll PCB as Marnus Labuschagne shares pic of his 'daal and roti' meal

After Khawaja's dismissal, half-centurion Carey combined with Cameron Green (28) for a 45-run stand for the seventh wicket to take Australia past the 400-run mark. The visitors are in a strong position in the game and will be looking to bowl out Pakistan quickly once they invite the hosts to bat in their first innings.