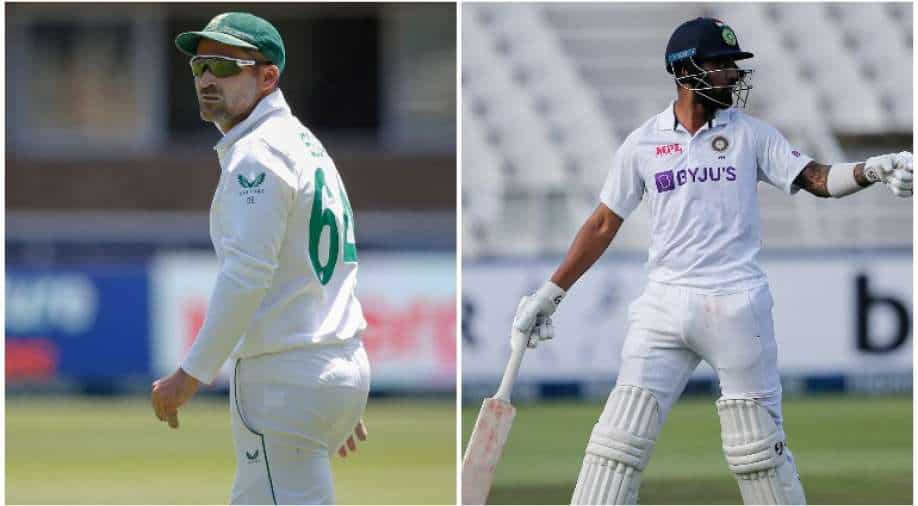 KL Rahul and Dean Elgar were involved in a heated exchange during Day 2 of the second and penultimate Test at The Wanderers, Johannesburg.

Day 2 of the second and penultimate Test between India and South Africa was a pulsating affair with as many as 11 wickets falling during the course of the match. Shardul Thakur's seven-wicket haul dismissed SA for 229 in response to India's first innings score of 202.

While the day ended with India 85-2, leading by 58 runs, they lost their stand-in skipper KL Rahul for cheap (8).The Indian captain was caught in the second slip, however, the 29-year-old didn't walk back instantly and rather let the umpires take the final call. Before he started walking back being disappointed with the final decision made, Rahul seemed to have heard something about him in the Proteas dugout which didn't please him. The Indian batter said something in response as his South African counterpart Dean Elgar also exchanged some words with Rahul.

Rahul and Elgar have an exchange. Not a pleasant one by the looks of it #INDvSA pic.twitter.com/whSm16T8gv

Earlier in the day's play, SA's middle-order batter Rassie van der Dussen had walked back to the pavillion when the ball seemed to have touched the ground before the edge from his bat was plucked by keeper Pant during Proteas' first essay. Hence, the talks in the SA dugout could've been about the contrasting responses from Rassie and Rahul with regard to their dismissals.

Day 3 of the second Test has started with a bang, with India losing both their overnight batters Cheteshwar Pujara (53) and Ajinkya Rahane (58). The visitors will look to setup a target beyond 230 for the home side at The Wanderers, Johannesburg.

For the unversed, India lead the three-match Test series 1-0 courtesy their 113-run win in the series opener in Centurion.